Drug of abuse is illegal drugs which are taken for the non-medical purpose. Testing of drugs of abuse is done with the help of samples of urine, hair, saliva, etc. The global at-home drug of abuse market is growing at a significant rate, due to the mounting usage of illegal drugs among teenagers, and augmented manufacture and exchange of illicit drugs. 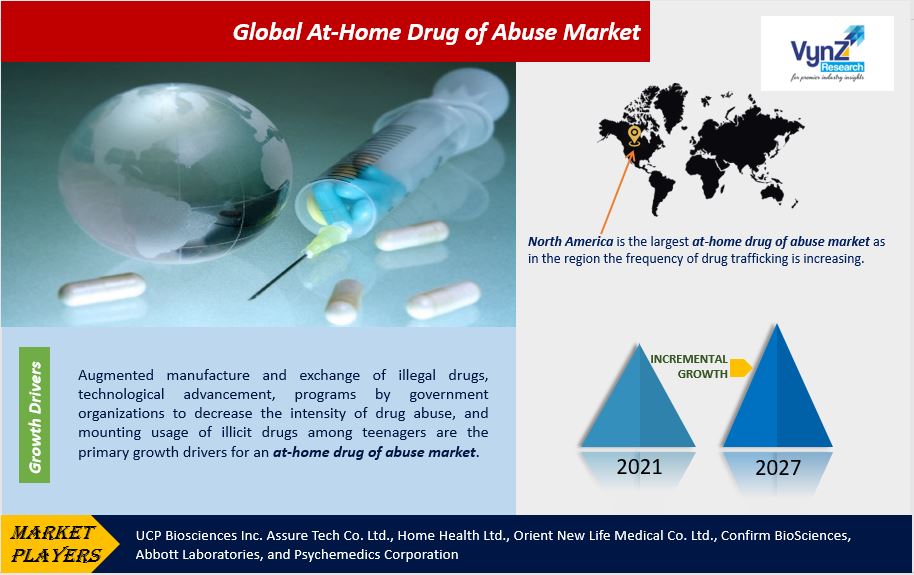 The rapid drug of abuse test kits is further subdivided into test dip cards, test cups, test strips, and others. Among all the test cups segment accounted for the largest share in the market, due to the widespread usage of test cups for urine testing at home.

On the basis of the sample, the market is subdivided into urine, hair, saliva, and others. Of all the samples, the urine accounted foremost share and is expected to grow at the fastest rate in the at-home drug of abuse market, as it is easy to use and cost effective.

Mounting dependence for synthetic cannabinoids, bath salts, and other evolving drugs are the trends in the at-home drug of abuse market. For instance, synthetic cannabinoids are structurally analogous to phytocannabinoids. It is human-made chemicals which are sprayed on dried plant material. It is similar to chemicals found in the marijuana plant. Moreover, bath salt is a human-made stimulant related to cathinone. Some of the health effects of synthetic cathinones are raised heart rate, chest pain and raised blood pressure.

Augmented manufacture and exchange of illegal drugs, technological advancement, programs by government organizations to decrease the intensity of drug abuse, and mounting usage of illicit drugs among teenagers are the primary growth drivers for an at-home drug of abuse market. For instance, according to the World Health Organization, globally in 2013, approximately 181.8 million people aged 15 to 64 years used cannabis for nonmedical purposes.

Moreover, the overdose of opioids leads to unfavorable and severe health conditions. For instance, according to the National Institute on Drug Abuse, in 2016, approximately, 2.14 million people aged 12 years and older had an opioid use disorder.

Mounting alertness about DOA testing, amplified usage of the drug of abuse tests for lawful and medical purposes, and alternative substance addiction are also facilitating the growth for the at-home drug of abuse market.

Certification of illicit drugs, the incompetence of testing products to identify exclusive drugs, and social issues related to substance usage testing are the major challenges for the growth of at-home drug of abuse market.

Globally, the manufacturing companies trying to enter the at-home drug of abuse market are required to maintain stringent regulatory standards. Moreover, the high level of capital requirement also poses a major barrier to the entry of new players. This offers an edge to the established players in the industry competition.

Geographically, North America is the largest at-home drug of abuse market as in the region the frequency of drug trafficking is increasing. In addition, mounting accessibility of illicit drugs and technological advancement are also up surging growth of the North American at-home drug of abuse market. For instance, according to the Centers for Disease Control and Prevention in 2016, approximately 48.5 million Americans used illicit drugs.