Industry Insights by Product (Catheters, Sheaths and Sheath Introducers, Guidewires and Accessories), by Application (Drug Administration, Blood Transfusion, Fluid and Nutrition Administration and Diagnostics and Testing) and by End User (Hospitals, Ambulatory Care Centers and Clinics and Others)

Transradial access devices are utilized in the endovascular or catheterization procedure to execute the analysis and treatment of any kind of arterial disease. Its kit includes various minor components such as catheters, accessories, sheaths and sheath introducers and guidewires. The global transradial access devices market is growing at a significant rate, due to mounting occurrence of lifestyle associated diseases and technological improvements. Different products contributed to the transradial access devices market size. The market has witnessed a high demand for catheters over the last few years due to budding amount of interventional and angiography procedures. 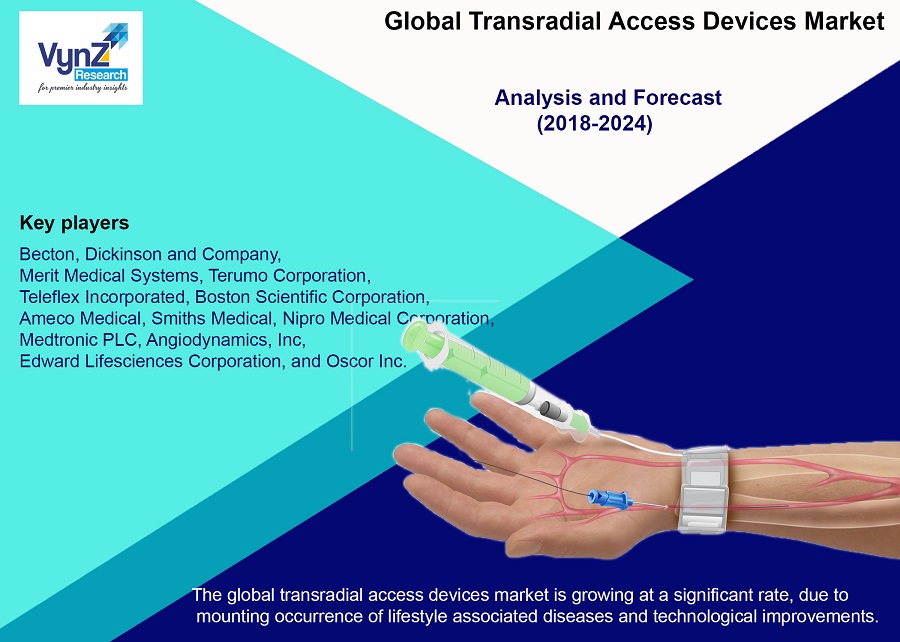 On the basis of product, the transradial access devices market is subdivided into catheters, sheaths, and sheath introducers, guidewires and accessories. Of all products, catheters market accounted the largest share and is expected to grow at the fastest rate due to mounting occurrence of lifestyle-related diseases such as diabetes, cardiovascular diseases and obesity, and budding amount of interventional and angiography procedures.

The mounting inclination for interventional procedures utilizing radial artery access, escalating occurrence of cancer, mounting usage of radial access devices in pediatric patients, mounting occurrence of lifestyle diseases such as cardiovascular diseases, diabetes and obesity, and boosting the number of chemotherapy procedures are the primary growth drivers for transradial access devices market. For instance, according to World Health Organization (WHO) globally approximately 17.7 million people died from cardiovascular diseases in 2015. In addition, according to the International Diabetes Federation (IDF) in 2017, globally approximately 425 million adults were suffering from diabetes and are expected to reach 629 million in 2045.

Technological improvements, mounting healthcare expenditure and expanding geriatric population are also facilitating the growth for the transradial access devices market. For instance, according to WHO, globally in 2010 approximately 524 million people were aged 65 years and older and is expected to reach 1.5 billion in 2050.

Globally, the manufacturing companies trying to enter the transradial access devices market are required to maintain stringent regulatory standards. Moreover, the high level of capital requirement also poses a major barrier for the entry of new players. This offers an edge to the established players in the industry competition.

Mounting occurrence of cancer, upsurge in clinical trials and research for vascular access devices, expanding the geriatric population, improved healthcare infrastructure, and the increasing number of conferences and workshops are also up surging the growth of the North American transradial access devices market. For instance, according to the U.S. Census Bureau, in 2012 approximately 43.1 million people were aged 65 years and older in the U.S. and is expected to reach 83.7 million in 2050.

Key players in the transradial access devices market are catering to the demand of these devices by investing in technologically advanced products in their product portfolio across the globe. In May 2018, Medtronic Plc announced advanced SynergyTLIF workflow, an integrated fully navigated procedure with less surgical procedures for lumbar spine surgery. Moreover, in February 2017, Medtronic Plc received FDA and CE clearance for DxTerity Diagnostic Angiography Catheter line and transradial-specific products such as TRAcelet compression device, DxTerity TRA, and InTRAkit access kit.