Secondary refrigerants are the fluids that are used to transfer heat from a substance which is being cooled by heat exchanger. After being cooled, the liquid is transferred through a series of pipes to the cooling load location, which is then returned to repeat the whole process. The secondary coolant circulates through a cooling system and cooled in a heat exchanger. They are generally non-toxic in nature in small amounts; however large amounts should be disposed in a proper manner. 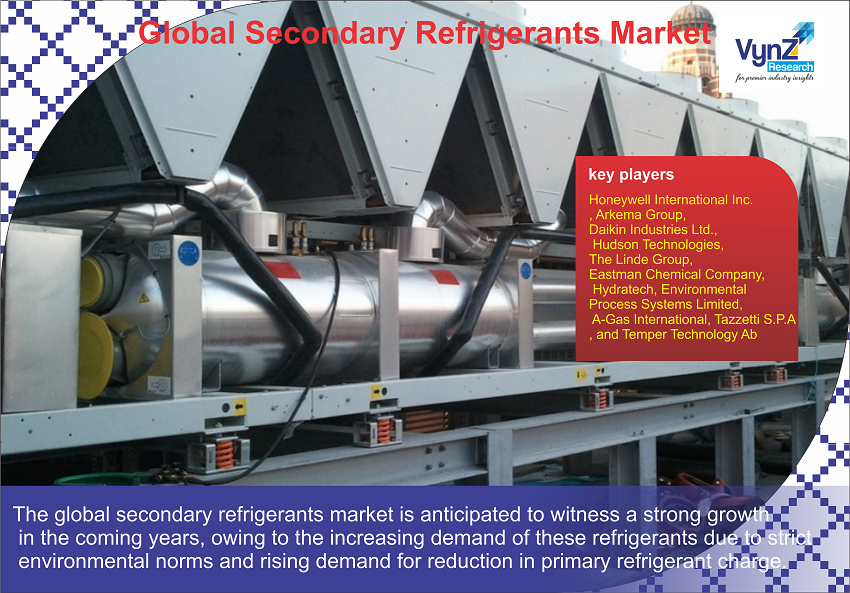 Based on type, the secondary refrigerants market is segmented into glycol, salt brines, carbon dioxide, and others. Glycol is further classified into propylene glycol and ethylene glycol. Salt Brines are further classified into calcium chloride, potassium formate, and potassium acetate. Among all these, glycol type category held the largest share in the overall market, owing to various advantages it offers such as; provide freeze protection for closed loop refrigeration systems, ventilation, air conditioning, water-based heating, and others. Along with that, glycol reduces the maintenance cost and has to be replaced after 3 to 5 years, fueling its demand in the market.

The carbon dioxide type category is anticipated to register the highest growth during the forecast period in the secondary refrigerants market. As carbon dioxide refrigerants are the environment-friendly type of refrigerants having zero ODP and minimal GWP. They also have good thermodynamics properties, are non-toxic, and also non-flammable.

The rapid industrialization, low environment impact, growth in oil and gas industry, expansion of the global cold chain market, and phasing out of chlorofluorocarbons (CFCs), hydrochlorofluorocarbons (HCFCS), and other refrigerant are the major factors driving the secondary refrigerants market growth. The governments of various countries are aiming to phase out CFCs, HCFCs, and other similar refrigerant to protect the ozone layer, which are causing major harm to the layer and contribute to climate change. For instance, in 2010, the U.S. has already banned the production, import and use of HCFC, except for servicing needs of already existing equipment.

High investment at the initial stages is identified as the major challenge in the secondary refrigerants market. For example, supermarkets are using carbon dioxide as a refrigerant due to their high energetic efficiency. However, the installation cost may become higher due to high pressure of carbon dioxide.

The secondary refrigerants market is highly fragmented, where major players are using various strategies such as merger, expansion, new launches, partnerships, and others to expand their footprints in the market.

What are the major Drivers for the study?

What are the Segments Covered in the Study?

What is the Base Year Considered in the Report?

What is the Forecast Period for the Report?