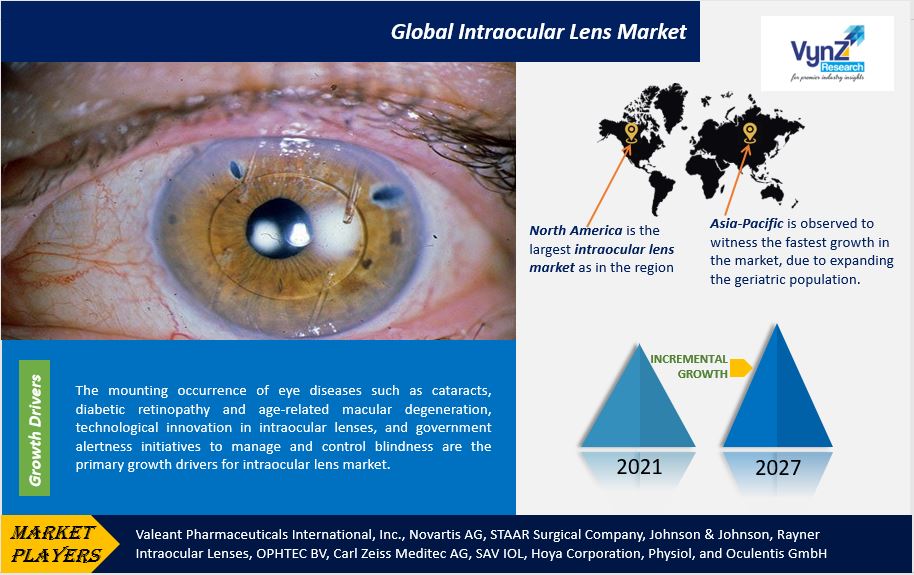 The different end users of the market are hospitals & clinics, and ambulatory surgery centers. Among all end users, the hospitals & clinics accounted for the larger share in the intraocular lens market due to a large pool of patients treated at the hospital, and mounting occurrence of eye disorders. In addition, the ambulatory surgery centers are expected to grow at the fastest rate in the market.

The mounting occurrence of eye diseases such as cataracts, diabetic retinopathy and age-related macular degeneration, technological innovation in intraocular lenses, and government alertness initiatives to manage and control blindness are the primary growth drivers for intraocular lens market.

Expanding geriatric population, the escalating number of blindness cases, the upsurge in healthcare spending, and mounting occurrence of lifestyle associated diseases such as diabetes and obesity are also facilitating the growth for the intraocular lens market.

Unfavorable reimbursement scenario and a dearth of Ophthalmologists are the major challenges for the growth of intraocular lens market.

Globally, the manufacturing companies trying to enter the intraocular lens market are required to maintain stringent regulatory standards. Moreover, the high level of capital requirement also poses a major barrier to the entry of new players. This offers an edge to the established players in the industry competition.

North America is the largest intraocular lens market as in the region.

What are the challenges in the global intraocular lens market?

Unfavorable reimbursement scenario and a dearth of Ophthalmologists are the major challenges for the growth of intraocular lens market.

What are the key growth drivers for this market?