Graft is a tube shaped synthetic material, used to patch injured or diseased area of arteries or veins. It is used to redirect flow of blood and restore normal blood flow within the body. The global vascular graft market is growing at significant rate due to rapid growth in geriatric population increasing prevalence of diabetes and cardiovascular disease and increasing prevalence of smoking. The market has witnessed high demand for endovascular aneurysm over the last few years, due to growing geriatric population and increasing demand for minimally invasive surgical procedures. 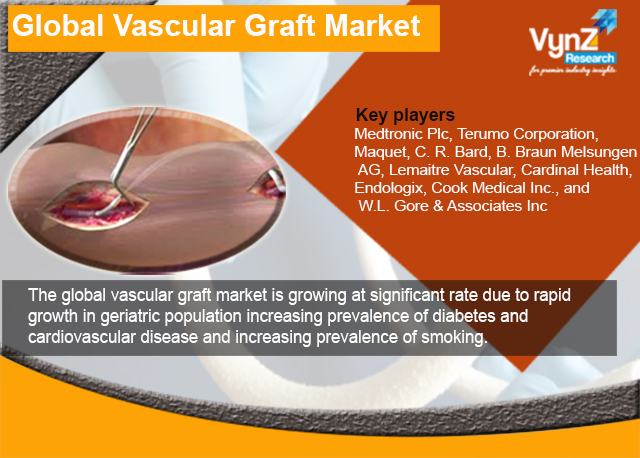 The global vascular graft market has also been subdivided by raw material into polyurethane grafts, polyester grafts, ePTFE grafts, and biosynthetic grafts. Polyester graft hold the largest share in the market due to high demand of polyester material due to its benefits such as greater lifespan, greater absorbency of polyester grafts and high patency.

The different end users are hospitals and ambulatory surgical centers. The hospitals are the largest end user category and is expected to exhibit grow the faster growth in demand for the vascular graft products due to promising reimbursement scenario for graft procedures in the developed countries, increasing prevalence of cardiovascular diseases, increasing prevalence of end stage renal disease and increasing adoption of minimally invasive procedure in hospitals.

The product failure and recall, high cost of treatment, and risk of infection and complications are the major challenge for the growth of vascular graft market. Some of the complications associated with grafts are sepsis, disruption of infected anastomotic rigid line, and amputation.

The key challenge for the new entrants is the survival in capital intensive and highly regulated vascular graft market. In addition, there is less product differentiation offered by existing players, which further increases the competition among the existing players.

Asia-Pacific is observed to witness fastest growth in the market as the region comprises of largest population and healthcare infrastructure is improving. In addition, growing geriatric population, increasing number of smokers, increasing medical tourism, and growing adoption of minimally invasive procedures are creating a positive impact on the vascular graft market growth in the region.

Key players in the vascular graft industry are investing in the development of innovative and advance graft products, which is strengthening their position in the market.  In January 2017, Terumo Corporation completed acquisition of vascular closure business and other assets of Abbott and St. Jude Medical. In addition, in May 2017, Medtronic announced the enrollment of first patient with end-stage renal disease in the IN.PACT AV Access Drug-Coated Balloon (DCB) study.

What are the challenges in the global vascular graft market?

The product failure and recall, high cost of treatment, and risk of infection and complications are the major challenge for the growth of vascular graft market

Which are the key trends for this market?

Which are the major end users for this market?