The global continuous wave radar market size is expected to reach USD 2.1 billion by 2030, registering a CAGR of 6.17% during the forecast period. Continuous wave radar is an advanced electromagnetic technology that measures the phase difference between radio waves with a known stable frequency that is transmitted and then received from objects that are reflecting them. This method may be used at both ends of the range to categorize and identify individuals based on various traits and the Doppler signals produced by body parts like the arms, chest, and legs when in motion. Continuous wave radar offers a variety of security and protection perimeter applications due to its lower cost and ability to detect target velocity by allowing a doppler shift. 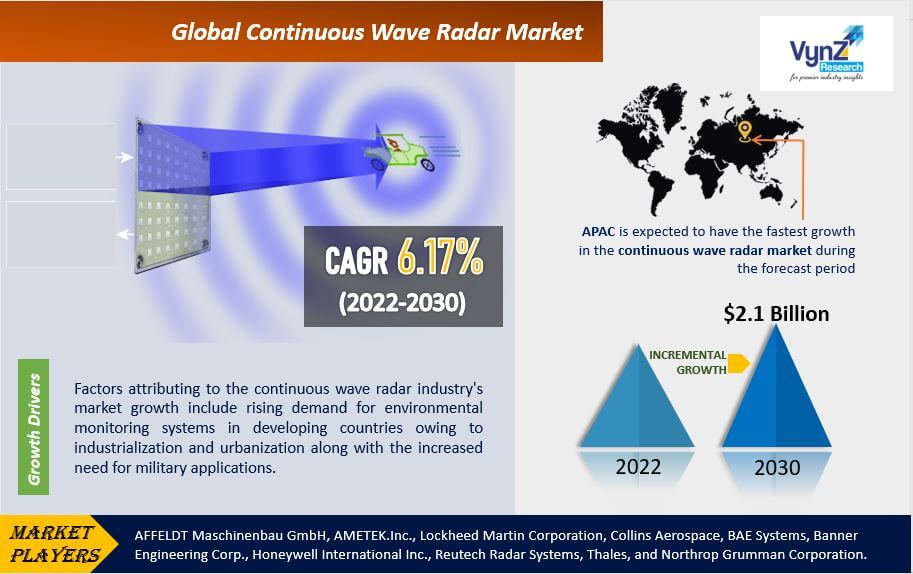 With an accuracy of roughly 0.001% of distance traveled for longer ranges, it has the ability to identify objects ranging from 200 meters to 100 kilometers. This type of radar has the advantage of being able to accurately detect objects over both land and water. It has better resolution (the distance between two similar points) than pulsed Doppler radars and does not require a return pulse-like pulsed radar system.

Based on Component, the Global Continuous Wave Radar Market is segmented into Antenna, Receiver, Transmitter, and Others. The transmitter is expected to have significant growth during the forecast period. The main benefit of continuous wave radar is that energy is not pulsed, making it easier to produce and use. Although the broadcast power level imposes a practical range limit, they have no minimum or maximum range. Considering that the transmitter broadcasts continuously with continuous-wave radar, the total power on a target is maximized. The overall bandwidth and transmitter power in a continuous-wave radar determine the maximum range. Distance performance is increased by about 20% when transmit power is doubled.

Based on Application, the Continuous Wave Radar Market is segmented into Environmental Monitoring, Military, Resource Detection, and Others. Environmental Monitoring is expected to have significant growth during the forecast period. Environmental monitoring includes many tasks related to the use of continuous-wave radar equipment for weather forecasting, such as measuring precipitation leading up to a possible storm front using centimeter-wavelength electromagnetic radiation beams (i.e., microwaves). When equipped with vertically pointing antennas, continuous-wave radars can also generate three-dimensional images. Furthermore, this type of instrument is used for weather surveillance in order to detect extreme weather conditions such as tornadoes, hail, or hurricanes.

Factors attributing to the continuous wave radar industry's market growth include rising demand for environmental monitoring systems in developing countries owing to industrialization and urbanization along with the increased need for military applications. Furthermore, the rising need for resource detection systems due to global warming issues, tolerance to adverse weather conditions, flexible mounting, and long-range detection will further propel the market growth of the global continuous wave radar industry. These radar-based sensors are increasingly adopted in aircraft, cars, and trains. Nevertheless, modern radar systems are more precise, reliable, and effective and are crucial to various countries' border security and surveillance techniques.

High costs and limitations to detect targets crossing beams at right angles are some of the challenges that may hamper the market growth of the global continuous wave radar industry.

Owing to the expansion of international sea trade and the transfer of massive amounts of goods, nations are being urged to increase the size of their fleets of merchant ships in order to balance supply and demand. Radar may be used to track these vessels, which is anticipated to favorably affect on creating opportunities in the continuous wave radar market. Increased adoption in passenger cars, and transport vehicles to assist in lane changing, in-cruise control, delivering collision warning, and mounting deployment in metrological monitoring and forecasting weather will accelerate the market demand for continuous wave radar systems.

Airports that handle a lot of both passengers and cargo must, however, consider the use of surveillance radar systems in order to maintain both passenger and cargo security. Both developed and developing countries' current geopolitical environments favour business investments aimed at product line diversification. It is anticipated that this will soon create new market opportunities for continuous wave radar.

APAC is expected to have the fastest growth in the continuous wave radar market during the forecast period owing to the presence of several SMEs, increased manufacturing facilities, expansion of marine trade, the surge in defense budgets, and increased implementation of radar technology.

The attempts undertaken by vendors to capitalize on the increasing demand for airborne and space-based radar systems are also creating a positive market outlook for the growth of the continuous wave radar industry. To gain a sustainable competitive advantage, vendors are emphasizing and forming alliances and collaborations with national military organizations These agreements for the delivery of radar systems frequently also cover tasks for maintenance and R&D activities.

Collins Aerospace, a Raytheon Technologies Corp. subsidiary, is a recognized leader in technologically advanced and intelligent solutions for the global aerospace and defense industries. Collins Aerospace, formed in 2018 by the merger of UTC Aerospace Systems and Rockwell Collins, has the capabilities, comprehensive portfolio, and expertise to solve customers' toughest challenges and meet the demands of a rapidly evolving global market. Their PSR-500 Perimeter Surveillance Radar System has features like Frequency Modulated Continuous Wave (FMCW) advanced radars and integrates all the functionalities that are necessary for perimeter surveillance. PSR-500 radars can detect mobile targets in all weather conditions, including rain and fog. Because of their range and target behavior analysis algorithms, radars are well-suited to the surveillance requirements of a wide range of sites. As a result, the PSR-500 has a very low false alarm rate.

Banner is a leading source for manufacturing needs, offering over 10,000 products. They provide award-winning sensors, wireless solutions, machine safety, indication, and LED lighting among other products and solutions. Radar sensors detect moving or stationary targets using Frequency Modulated Continuous Wave (FMCW) radar. Even in extreme weather, lower-frequency radars can see high-dielectric objects such as cars, trains, trucks, and cargo. In most applications, including outdoors, higher-frequency radar can see a wider range of objects and is more robust than ultrasonic sensors. Radar-based sensors are also ideal for collision avoidance on mobile equipment like reach stackers, forklifts, and mining vehicles, as well as port machinery like carriers, handlers, and shippers.

In September 2022, Lockheed Martin delivered a new benchmark to the Office of the Under Secretary of Defense for Research and Engineering OUSD (R&E): a tactically pertinent electric 300 kW-class laser, the most powerful laser produced by Lockheed Martin to date. This 300 kW-class laser is ready to integrate with DOD demonstration efforts, such as the United States Army's Indirect Fires Protection Capability-High Energy Laser (IFPC-HEL) Demonstrator laser weapon system. Lockheed Martin has enhanced the power and efficiency of continuous-wave high-energy lasers while decreasing the weight and volume, lowering the risk for future fielding efforts of high-power laser weapon systems.

The Continuous Wave Radar Market report offers a comprehensive market segmentation analysis along with an estimation for the forecast period 2022–2030.

What are the challenges faced by global continuous wave radar market?

High costs and limitations to detect targets crossing beams at right angles are some of the challenges that may hamper the market growth of the global continuous wave radar industry.

What is the market share of the continuous wave radar market during the forecast period?

The global continuous wave radar market size is expected to register a CAGR of 6.17% during the forecast period.

What are factors driving growth of the continuous wave radar market?

The high-resolution velocity measurement is made possible by the long signal duration. The increased concern for safety and security, the surge in defense budgets, and increased construction of new airports and terminals will significantly drive the continuous wave radar market development. Moreover, the increased terrorist activities, global conflicts, and border incursions are considerably contributing to the market growth of the global continuous wave radar industry.

Which region is expected to have fastest growth during the forecast period?

APAC is anticipated to have fastest growth in the continuous wave radar industry during the forecast period owing to increased funding and investments, the surge in research and development activities, and increased expenditure in the defense sector. There is an increase in territorial disputes globally that leads to the need for effective monitoring systems, thereby raising national military budgets. Hence, driving the market growth for the global continuous wave radar industry.

Name some of the major players in the global Continuous Wave Radar industry.