The global IoT Node and Gateway market size is anticipated to grow from USD 392.3 billion in 2021 to USD 583.4 billion by 2030. It will register a CAGR of 7.2% during the forecast period. The term "gateway" in telecommunications refers to networking equipment. The function of gateways is carried out by computers or computer networks. Gateway nodes are computers that allow internet service providers to connect with internet users. The security and filtering of data, processing, protocol conversion, connecting devices, and other essential tasks are all carried out by an IoT node and gateway hardware and software. IoT nodes and gateways serve as an interface for a number of auxiliary systems, including devices, controllers, sensors, and the cloud. As a result, IoT nodes and gateways offer extra security, processing, and storage capabilities to the end nodes in an economical and power-efficient manner. IoT node and gateway is being adopted in several applications like consumer electronics, agriculture, automotive, oil & gas, BFSI, transportation, aerospace & defense, retail, healthcare, etc.  The increased adoption of cloud-based services and industrial automation are the trends prevalent in the market growth of the IoT node and gateway industry. 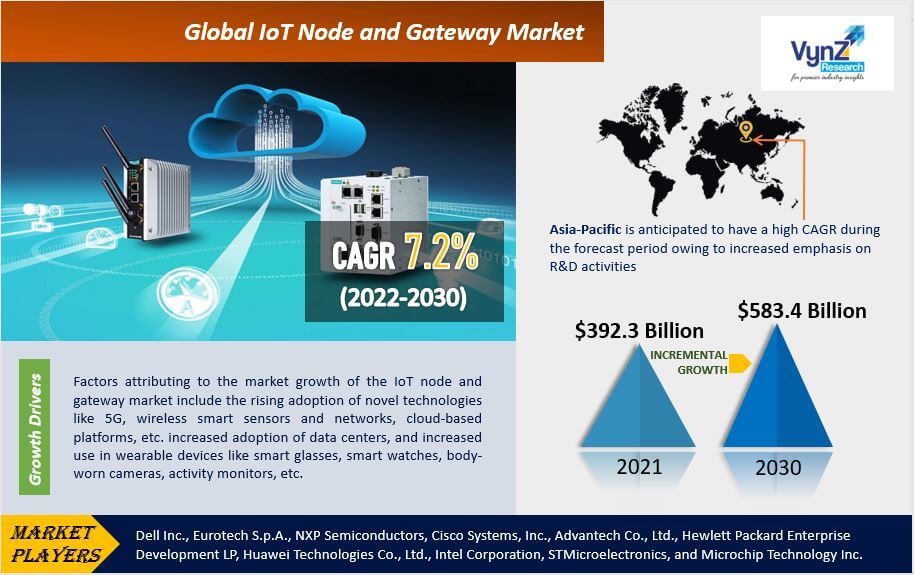 Based on Component, the Global IoT Node and Gateway Market are segmented into Hardware, Processors, Connectivity Integrated Circuits (ICs), Sensors, Memory Devices, and Logic Devices. The microcontroller, application processor, microprocessor, and digital signal processor are the four components that make up the hardware segment. Connectivity IC contributes the largest share in the market owing to a surge in demand for low-profile connectivity technology like Bluetooth Low Energy (BLE), Wi-Fi, and Bluetooth. IoT node and gateway demand are expected to increase over the projected period due to the continuous expansion of data transmission and the growing need for low-profile networking technology.

Based on End-Use Application, the Global IoT Node and Gateway Market is segregated into Industrial and Consumer. Industrial is further divided into Healthcare, Automotive & Transportation, Building Automation, Retail, BFSI, Oil & Gas, Aerospace & Defense, Agriculture, and Others. The consumer segment is further divided into Wearable Devices and Consumer Electronics. The BFSI industry segment is anticipated to grow at a fast pace in the IoT node and gateway market.  The emergence of digitization has prompted development in technological applications in the banking and financial sector.

Banks and other financial institutions want to increase their client base, hence providing customers the opportunity for easy and hassle-free transactions.  The potential for mobile point-of-sale devices is expanded by the growing user base of consumer electronics. Online payments are made easier due to the increasing usage of smartphones and tablets, which will contribute to the IoT node and gateway industry.

Factors attributing to the market growth of the IoT node and gateway market include the rising adoption of novel technologies like 5G, wireless smart sensors and networks, cloud-based platforms, etc. increased adoption of data centers, and increased use in wearable devices like smart glasses, smart watches, body-worn cameras, activity monitors, etc., thereby proliferating market development of IoT node and gateway industry. Moreover, increased development in telecommunication networks, the growing importance of IT security, lifestyle changes, remote working culture, gaming, healthcare awareness, and a more connected virtual world all contributed to an increase in demand for wireless and connected devices, resulting in the growing adoption of IoT nodes and gateways.

IoT nodes and gateways aid in the security of IoT by utilizing data encryption frameworks and security certifications (SSL/TSL). For IoT gateway device hardware security, it employs Trusted Platform Module (TPM) and Trusted Execution Environment (TEE). IoT nodes and gateways are used to connect networks of multiple IoT sensors. It makes use of sensor nodes that are based on Bluetooth, Zigbee, Zwave, LoRA, 6LoWPAN, and WiFi protocols.

Furthermore, the aerospace and defense industries benefit from IoT nodes and gateways by having access to extensive machine data and sensors for end-user applications. Sensors can be used in machinery, vehicles, and machines. IoT provides aircraft with a number of opportunities for improving baggage handling and providing equipment monitoring.

The vulnerability associated with IoT Nides and lack of assurance for security measures so as to control and secure data is some of the challenges that may hinder the market growth for the IoT node and gateway industry.

The market for IoT nodes and gateways is very competitive. In order to strengthen their brands and generate income, a number of important players are currently improving their services. To expand their company portfolio, they engage in mergers, collaborations, market research, acquisitions, product launches, and many other activities.

Global semiconductor manufacturer NXP develops products that enable secure connectivity for a better world. The IoT Gateway Solution provided by NXP offers preintegrated, robust, and fully documented out-of-the-box guidance and assistance in an effort to hasten IoT development. It consists of the NXP Modular IoT Gateway and Modular Edge Node, both of which have undergone testing and verification for ZigBee® and Thread® connectivity as well as secure cloud communications across Wi-Fi, Ethernet, and cellular, thereby enabling access to cloud services. The Rapid IoT Prototyping Kit from NXP is a complete, secure, and power-efficient solution made to hasten the construction of an IoT end node prototype.

HPE is a multilateral edge-to-cloud company committed for business transformation.  The HPE GL20 IoT Gateway is a tough Performance-Optimized edge gateway with more features and higher compute capabilities. It handles large data volume deployments at the edge and is optimally configured with CPU, memory, connectivity, and an expansion I/O selection, including four (4) Power over Ethernet (PoE) ports as well as 8-bit Digital Input/Output (DIO), to meet a wide range of IoT requirements.

In June 2022, Microsoft and STMicroelectronics are collaborating to develop a comprehensive MCU security platform.

The  IoT Node and Gateway Market report offers a comprehensive market segmentation analysis along with an estimation for the forecast period 2022–2030.

What is the market size and market share for the global IoT Node and Gateway Market?

What ate the components of IoT Node and Gateway Market?

Based on Component, the Global IoT Node and Gateway Market are segmented into Hardware, Processors, Connectivity Integrated Circuits (ICs), Sensors, Memory Devices, and Logic Devices. The microcontroller, application processor, microprocessor, and digital signal processor are the four components that make up the hardware segment.

What are factors attributing to the market growth of the IoT node and gateway market?

Which region contributes the largest share in the IoT node and gateway market?

North America contributes the largest share in the IoT node and gateway market owing to the rising prominence of the internet in residential and commercial areas, surging consumer base, rising disposable income, and enhanced IT infrastructure

Name some of the major players in the global IoT Node and Gateway industry.