The global lithium ion battery market size is anticipated to reach USD 113.7 billion by 2028 from USD 38.6 billion by 2021, registering a 12.8% CAGR during the forecast period. A rechargeable lithium-ion battery is an advanced battery technology that employs lithium ions as a main component of its electrochemistry. In comparison to other batteries, Li-ion batteries have a very high voltage and charge storage per unit mass and volume. Features such as a long life duration, lower battery prices, and high density, increased usage in consumer electronics, and growing R&D endeavors by various organisations and battery manufacturers are projected to fuel the market expansion of lithium-ion battery. 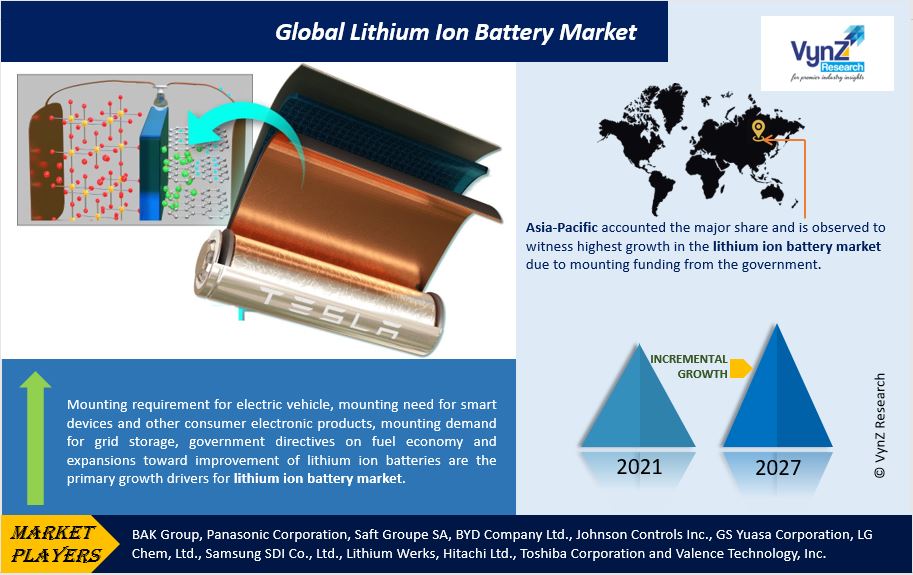 The increased prominence of internet usage will further accelerate the consumer demand for smart phones, tablets, laptops, etc. Also, the increased disposable income and changing lifestyle of consumers are the trends that may proliferate the market growth of lithium ion batteries in several industry verticals.

Russia and Ukraine have large lithium reserves that have yet to be used, and Russia is a major supplier of nickel, palladium, aluminium, platinum, steel, and copper. As a result of the crisis in Ukraine and the sanctions imposed on Russia, some industrial raw materials will undoubtedly be in short supply. Also, Li-ion battery market will be influenced to some extent, but the effects will not be significant. In terms of lithium, the most important factor to remember is that there is a vast majority of reserves in Russia and Ukraine which are unexplored. Although the war has slowed ambitions to extract it, it hasn't halted much existing production.

Lithium Iron Phosphate (LFP) contributes the largest share in the lithium ion battery market owing to rising demand of batteries having portability, durability, and efficacy. Furthermore, LFP batteries offers long shelf life and is one of the safest solution, thus driving growth of the segment.

Lithium Nickel Manganese Cobalt (NMC) category is anticipated to have a high CAGR during the forecast period owing to reduced cost and long life. Moreover it is extensively adopted in several equipment’s like electric bikes and electric powering trains.

The automotive industry is anticipated to have the largest share in the lithium ion battery market owing to reduced dependency on fossil fuels by the automotive sector, rising sale of electric vehicles. Furthermore, compared to nickel-based batteries, self-discharge is less than half. When a lithium-ion battery is brand new, it does not require extensive priming. Lithium-ion batteries require low-maintenance and can sustain hundreds of charge/discharge cycles. Due to their enticing features like high energy efficiency, long life cycle, high energy density, and high power density, lithium-ion batteries are currently the most ideal energy storage device for powering electric vehicles (EVs). Because lithium-ion batteries have higher energy densities than lead-acid or nickel-metal hydride batteries, they may be made smaller while maintaining the same storage capacity. Furthermore, increased government expenditure is critical in accelerating the adoption of electric vehicles.

Furthermore, due to EPA rules on lead contamination and the related environmental concerns, as well as laws on lead-acid battery storage, disposal, and recycling, demand for lithium-ion batteries in automobiles has increased.

The expanding market for consumer electronics and smartphones is projected to fuel demand for high-capacity batteries that allow devices to function for long periods of time while maintaining optimal device performance.  It is widely utilised in a variety of electronic devices, including smart phones, laptops, iPods, PDAs, etc.  Radio-controlled hobby vehicles, notebooks, portable vaporizers, drones, and unmanned aerial vehicles are all examples of lithium-ion battery applications.  The connected and smart consumer products are currently in high demand. However, while building smart devices, the battery is the most important power capacity to consider. As a result of its design flexibility, rechargeability, and ease of getting fit in a bespoke size, Li-ion batteries are the most preferred choice for consumer electronic items. As a result, Lithium ion batteries are expected to create a plethora of lucrative business prospects for market participants in the future years.

Other factors attributing to the growth of lithium ion battery market increased requirements for continuous power supply from critical infrastructure in the wake of COVID-19, surging demand for battery operated material handling equipment in industries as a result of automation, rising need for plug-in vehicles, incessant development of smart devices, and rapid adoption of lithium-ion batteries in the renewable energy sector. The market is expected to increase due to large-scale energy storage and stationary standby applications such as UPS and switchgear & control.

Li-ion batteries, while their scientific potential, nonetheless have numerous flaws, particularly in terms of safety. Because they contain flammable electrolytes, so they must be handled with caution. Some of the primary factors that are predicted to stymie the market's growth include concerns about the transportation and storage of spent batteries.

The significant cost associated with lithium-ion batteries compared to lead-acid, sodium-sulfur, and nickel-metal-hydride batteries is predicted to limit their usage. As a result, market growth is being hampered by the poor acceptance rate of these batteries due to their expensive cost.

Asia-Pacific contributes the largest share in the lithium ion battery market owing to rising demand for smartphones and tablets along with electric vehicles in developing countries like China, Japan, and India, an upsurge in funding from the government, increased disposable income and rising consumer awareness about environment-friendly technologies will proliferate the market growth of the lithium ion batteries in the region.

The key industry participants are focusing on strategic collaborations to achieve a competitive advantage. To establish their brand in the lithium-ion battery market, prominent industry players are using methods such as mergers, acquisitions, partnerships, and joint ventures. In order to gain a dominant position in the lithium-ion battery market, these techniques are also assisting in improving production efficiency and lowering overall battery prices. The government is also assisting on a major scale in this regard.

Panasonic Corporation is a world pioneer in the development of breakthrough technology and services for consumer electronics, housing, automotive, and business-to-business applications (B2B).

Panasonic's specialised technologies have made batteries thinner and lighter for use in devices such as notebook computers and mobile phones. They are also used in electric vehicles (EV), backup base stations for mobile telephones, solar-powered electricity storage systems, and a variety of other industrial applications. Panasonic continues to improve battery materials and manufacturing processes, while also working to improve battery control technology, thus allowing Panasonic batteries to be used safely, particularly when layering up from cell to pack, module, and system. These activities contribute to Panasonic's batteries' high reliability.

Cylindrical, prismatic, and polymer batteries, as well as battery packaging and solutions, are among BAK Power's goods and services, which are largely employed in new energy vehicles, consumer products, and backup energy storage. They offer a complete line of BAK Lithium Ion Battery batteries ranging in size from 2200mah to 5000mAh.

In April 2022, Li-Cycle Holdings Corp., a Toronto-based lithium-ion battery recycler that will recycle scrap material from Ultium Cells' electric-vehicle battery-cell production, has a commercial agreement in place for the recyclable material with South Korea's LG Energy Solution. A second agreement was reached with LG Chem Ltd. and LG Energy Solution for the sale of nickel sulphate from Li-hub Cycle's in Rochester, New York. Meanwhile, work is underway to construct a 120,000-square-foot facility adjacent to the Lordstown megafactory to recycle manufacturing scrap and materials from Ultium Cells.

Panasonic Corporation stated in February 2022 that its Energy Company will open a production plant at its Wakayama Factory in western Japan to build new "4680" lithium-ion batteries for electric vehicles (EVs) in order to expand its company globally.

The Lithium Ion Battery Market research includes a comprehensive market segmentation analysis as well as projections for the analysis period 2022-2028.

What are the competitive strategies followed by lithium ion battery market?

Key players in the lithium ion battery market are catering the demand by collaborating with small players and investing on technologically advanced batteries across the globe.

What are the growth drivers for the lithium ion battery market?

Which region accounts for the major share in the lithium ion battery market?

Asia-Pacific accounted for the major share in the lithium ion battery market due to mounting funding from the government and development in automotive and consumer goods sector.