The global Mobile Artificial Intelligence market currently is USD 38.6 billion in 2022 and is expected to reach USD 78.8 billion by 2030, a CAGR of 13.6% during the forecasted period 2022-2030. In a variety of sectors, including travel, advertising, utilities, telecommunications, and equipment, mobile artificial intelligence has had a significant impact on how people interact with machines and gadgets. It has the capacity to carry out and finish repetitive tasks that people do excessively. It is also widely used in fields that demand a high degree of exactness and accuracy, using augmented reality. Due to the rising demand for mobile devices with AI-capable CPUs and the increasing need for cognitive computing, the market for mobile artificial intelligence is expanding significantly. The market is influenced by a variety of applications, including drones, cameras, smartphones, and cars. 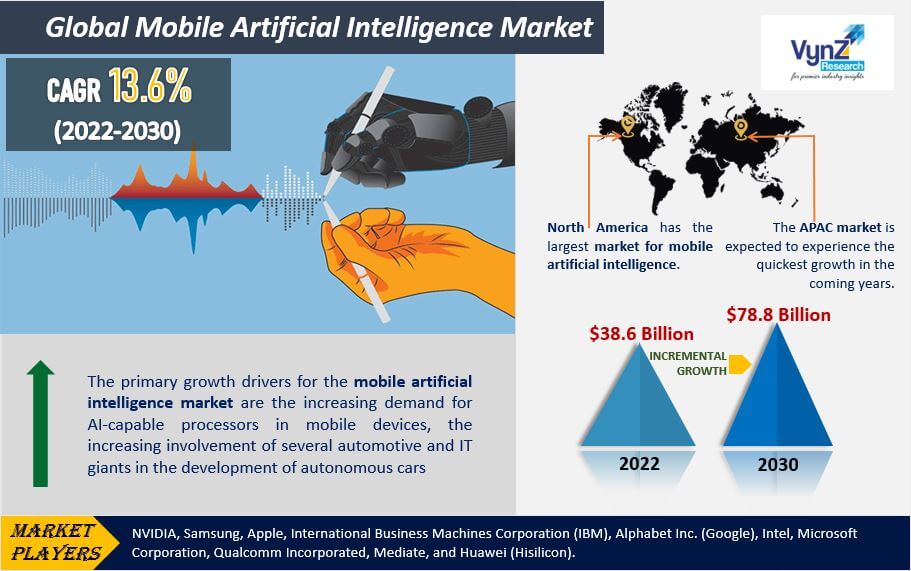 The mobile artificial intelligence market is categorized, based on application, into smartphones, robotics, augmented reality/virtual reality (AR/VR), cameras, drones, automotive, and others. Among these, due to the growing desire for faster computing, low latency, advanced security, and reduced reliance on connectivity, the smartphone category accounts for the biggest share in the market. Whereas, the AR/VR category is projected to expand at the quickest rate during the forecast period. This can be because major industry participants are advancing AR/VR technology by implementing tactics such as investments, product launches, and acquisitions.

The mobile artificial intelligence market is categorized into 20–28 nm, 10 nm, 7 nm, and others, based on technology nodes. Among these, the 20–28 nm category is projected to grow at the quickest rate in the coming years. This can be because drones, ADAS, surveillance cameras, robots, and AR/VR headsets are just a few of the applications that use processors built on the 20–28 nm technology node.

The primary growth drivers for the mobile artificial intelligence market are the increasing demand for AI-capable processors in mobile devices, the increasing involvement of several automotive and IT giants in the development of autonomous cars, the growing number of AI applications, technological advancements in smartphone image recognition, and the rising need for cognitive computing.

Large IT companies are working on technologies like virtual reality and augmented reality, which is helping the market expand. To bring fresh technological innovation and to profit from the burgeoning standalone and smartphone VR business, Qualcomm Incorporated, for example, unveiled a new virtual reality (VR) orientation platform built on the potent Qualcomm Snapdragon 845 Mobile Platform.

Moreover, the growing demand for real-time speech and voice recognition and analysis dedicated to low-cost AI chips for camera and vision applications in mobile devices, and the mounting need for edge computing in the internet of things are the other key factors propelling the growth of the mobile artificial intelligence market.

The main obstacles to the growth of the mobile artificial intelligence industry are the high cost of AI processors, the unpredictable nature of AI algorithms in mobile apps, and a lack of AI professionals.

Players in the sector are launching new products to take advantage of market expansion on a global scale. The biggest obstacle to the entry of new players is the high level of capital requirement. This gives established businesses an advantage in the industry's rivalry and helps them keep market share.

Geographically, due to the surging demand for mobile devices with AI-capable CPUs, North America has the largest market for mobile artificial intelligence. The development of augmented reality and virtual reality technologies by major tech companies, and technological advancements in smartphone image identification are also contributing to the expansion of the regional market.

On the other hand, because of the rising government spending, the APAC market is expected to experience the quickest growth in the coming years. The expansion of cognitive computing and the increasing number of AI applications are also contributing to the growth of the mobile artificial intelligence market in the region.

In May 2022, Google introduced "Manufacturing Data Engine" and "Manufacturing Connect," two new products in May 2022, to assist manufacturers in processing and standardizing data and enhancing visibility from the factory floor to the cloud.

Microsoft in March 2022, announced improvements to its cloud-based life sciences and healthcare technologies which includes the availability of Azure health data and enhancements to the Microsoft cloud for healthcare.

Microsoft stated that Teams basics, a professional and cost-effective meeting solution, would be made available in December 2021.

In May 2021, Google introduced three new services, "Dataplex, Analytics hub, and Datastream," to give users access to a single data cloud platform. Additionally, it would equip them to confidently forecast business results.

Intel Xeon Scalable, the most extensively used server platform in the market with more than 30 million units shipped, will now have new performance and performance-per-dollar-optimized processors, the company revealed in February 2020. These new CPUs are aimed at the majority of Intel's Xeon Scalable clients in the cloud, network, and edge.

Key Players covered in the report

The Mobile Artificial Intelligence Market report offers a comprehensive market segmentation analysis along with an estimation for the forecast period 2022–2030.

Which are the major application for this market?

Smartphone segments are the major application for this market.

Geographically, North America is the largest mobile artificial intelligence market due to the mounting requirement for AI-capable processors in mobile devices.

What are the challenges in tglobal mobile artificial intelligence market?

The high pricing of AI processors and an inadequate number of AI experts and unpredictability of AI algorithms in mobile apps are the major challenges for the growth of mobile artificial intelligence market.