Global Air Ambulance Market – Analysis and Forecast (2021-2027)
Industry Insights by Type of Aircraft (Helicopter, Airplane, and Seaplane), and by Service (Hospital-Based, Community-Based and Others)

Air ambulance service is an advanced and sophisticated medical service which uses air transportation such as airplane and helicopters. It is the most effective and vital mode of transportation in case of a medical emergency at the hospital, accident site, and home. It helps to shift critical patients to hospitals as they consume less time to travel. It comprises of trained medical staff and is equipped with medical treatment facilities used in emergencies to treat patients and provide immediate medical care in the emergency. It is effective in serving people in war-torn areas and those affected by natural disasters. 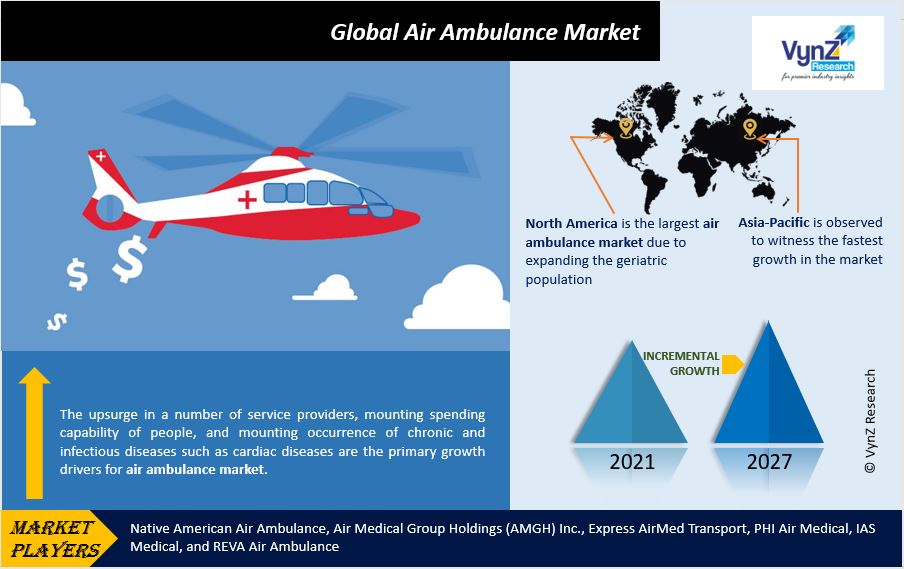 The global air ambulance market is growing at a significant rate, due to the mounting occurrence of chronic and infectious diseases and access to remote areas. Different type of aircraft such as helicopter, airplane, and seaplane contributed to the air ambulance market size. The market has witnessed high demand for helicopter due to its ease in landing and taking off from a smaller ground area, and it facilitates wider reach in remote areas.

Insight by Type of Aircraft

On the basis of the type of aircraft, the air ambulance market is subdivided into helicopter, airplane, and seaplane. Of both aircraft types, helicopter segment accounted the largest share in the market, due to its ease in landing and taking off from a smaller ground area, and it facilitates wider reach in remote areas. The aircraft segment is further subdivided into rotator-wing aircraft and fixed-wing aircraft. The fixed-wing air ambulance is a safe, reliable, and quick way of transporting patients. The fixed-wing aircraft is expected to grow at a significant rate due to mounting spending capability of people and expanding medical tourism.

On the basis of service, the market is subdivided into hospital-based, community-based and others. Of all the services, the hospital-based accounted the largest share in the market, as it provides air medical transportation services to multi-specialty hospitals and other healthcare centers.

The mounting extent of insurance coverage, technological advancement, and safety-related rules and regulation are the trends in the air ambulance market. For instance, in developing countries such as China and India, the reimbursement methods by health insurance companies or government for emergency ambulance services are improving, which will propel the demand for the air ambulance.

The upsurge in a number of service providers, mounting spending capability of people, and mounting occurrence of chronic and infectious diseases such as cardiac diseases are the primary growth drivers for air ambulance market.

Moreover, advancement in healthcare technology and escalating patient inclination towards efficient and faster mode of delivery is also fueling the growth of the market. For instance, it is widely used on the warfront to rescue injured soldiers and offer emergency medical care to them.

Access to remote areas, expanding the geriatric population, and advanced onboard medical treatment is also facilitating the growth for the air ambulance market.

Elevated air ambulance service charges, stringent safety rules and regulations, and lack of proper communication are the major challenges for the growth of air ambulance market. In addition, operational constraints, lack of infrastructure, and an inadequate number of aircraft in developing countries, and escalating occurrence of air ambulance accidents are also hindering the growth of the market.

Globally, the manufacturing companies trying to enter the air ambulance market are required to maintain stringent regulatory standards. Moreover, the high level of capital requirement also poses a major barrier to the entry of new players. This offers an edge to the established players in the industry competition.

In addition, Asia-Pacific is observed to witness the fastest growth in the market due to the mounting occurrence of chronic diseases. In addition, mounting spending capability of people, expanding medical tourism and strengthening the economy is also up surging the growth of the Asia-Pacific air ambulance market.

Which region holds the highest potential for the Air Ambulance Market growth?

What are the segments of the Air Ambulance Market?

The segments of the Air Ambulance Market include Aircraft, Service and Region

Who are key players of the Air Ambulance Market?