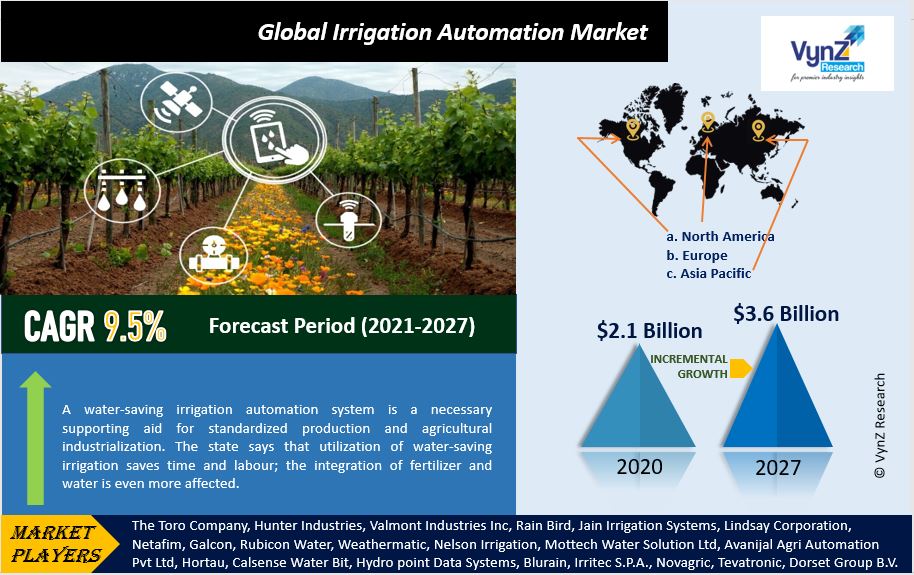 The demand for irrigation automation is drastically increasing because of the shifting trend from manual towards agricultural processes mechanization, and increased cases of water scarcity across the globe. One of the key factors that disrupt its adoption in small land-holding farmers of the Asia-pacific region is the cost factor. The high expense of the Irrigation Automation Market is expected to act as a concern for the growth of the global Irrigation Automation Market for the forecast period.

The recent outbreak of COVID-19 has sellers and manufacturers of the irrigation automation market face many production issues, like shortage of resources, non-availability of raw materials and factory shutdowns. In the same way, the pandemic has also led to disruptions in the many small and large supply chain in the agriculture ecosystems. The decrease in the supply of hardware equipments is affecting the market players across the irrigation automation market. Owing to low human intervention, the remote irrigation procedures are affected less by the current pandemic, and are likely to result in highly vigorous demand over the forecasted years.

Irrigation Automation is a process of irrigating with the added capabilities of automatic systems. Over the years, the manual irrigation process has shifted to automatic systems. An automated irrigation system is the operation of the system with zero or minimal manual intervention apart from the surveillance. Almost every irrigation system, be it surface, sprinkler or drip, can be automated with help of computers, sensors, timers or other mechanical appliances. Agricultural activities globally are adopting the mechanization and latest smart technologies for varied purposes in order to reduce the labour cost and complete the work in the lowest possible time with much better results. This requirement is fulfilled with Irrigation Automation Market.

Based on Irrigation Type

Among all segments of the Irrigation Automation Market, the Drip Irrigation Segment is estimated to be fastest-growing for the forecasted period.

As per the Irrigation type, the market for irrigation automation is segmented into the following irrigation control systems:

The automated drip irrigation systems have a higher rate of efficiency and a life span of more than ten years making it the most adopted type of irrigation system in countries like the U.S.A, Brazil, Canada, & Spain, for row crops and vegetable.

The automatic systems segment is expected to be the fastest-growing segment of the irrigation automation market for the forecast period.

Due to the high adoption of automated irrigation systems in countries, like China, the US, Spain, Canada, and Italy, where these systems are highly used for non-agricultural applications, the market for them is expected to grow with a higher CAGR during the said period.

Based on Automation Type

The time-based system is estimated to capture the largest share of the irrigation automation market for the forecast period.

The volume-based and time-based are of the semi-automatic type and they provide the customer with the option to control the all-irrigation process with respect to volume or time. The time-based systems provide this flexibility, which is highly common among farmers.

The controller component segment is estimated to be the fastest-growing in the market for irrigation automation market among all the segments during the forecast period.

As per the Components, the market for irrigation automation is segmented into the following irrigation control systems:

Controllers play an integral role in the irrigation system. The controller component was the highly adopted component of all automation systems in 2019. It helps in supplying the exact amount of water at the right time and with high efficiency in chemical, energy, and water usag.

Based on End Use

The fastest-growing segment from the irrigation automation market for the forecast period is estimated to be the non-agricultural segment.

As per the End Use, the market for irrigation automation is segmented into the following irrigation control systems:

The rising numbers of Golf courses and other sports complexes around the globe have led to the adoption of the irrigation automation system for watering. These irrigation automated systems make sure on-time watering with the exact amount of water and reduced water bills for the growers and owners.

Globally, there are large ranges of an irrigation automation system that are available in the markets, which are selected on the basis of their uses in different sectors of agricultural operations. All the products in this section are smart sensors, weather tracking, , machine learning, farming & robotics, smart irrigation systems, RFID sensors & tracking, analytics and much more which are trending in the market due to their speciality and features.

Increased mechanization and adoption of smart technologies for agricultural work.

The government provided initiatives for promoting water conservation. Many governments aid the installation of irrigation automation systems and take many initiatives in order to promote water conservation across the globe because of the rising issues of water scarcity. For example, just recently, the government of Australia, announced the On-farm Irrigation Efficiency Program (OFIEP) in order to support individual irrigators, improve their productivity and efficiency in on-farm irrigation water management and use.

This program will help irrigators to enhance irrigation infrastructure in order to save water and change irrigation practices. Some of these practices include installing automatic outlets or gates, telemetry systems, and water metering, among others. Also, in September 2019, the Western Australia Government offered a rebate for an automated irrigation controller and weather smart to Perth’s residential customers. This rebate was for the purchase and programming of smart irrigation and weather automated products to aid them in saving water.

Growing awareness about the benefits of irrigation automation among farmers.

Real-time control handles the task of opening or closing the water delivery valve as per the soil moisture, growth of crops, etc. Real-time data collection through the collection of pipeline flow, pressure, soil moisture, operating conditions, valve status, and other parameters; and as per the actual situation of alarm and data pre-processing. The system does not need human interference through the pre-programmed control program, and it can actually open and close the pump automatically for a long time and also automatically irrigate as per exact parameters reflecting the required crop water demand.

Based on Geography, the Irrigation Automation market is segmented into:

Significant growth is to be witnessed by the Asia Pacific segment from the year 2021 to 2027.

The key driver for APAC to grow over the next 5 years, at the estimated highest CAGR, is the decrease in annual precipitation and water scarcity. Increasing awareness among the farmers regarding the benefits of adoption of automated and semi-automated systems along with the decreasing water levels of the river basins in the Asia Pacific region too are a few of the drivers factoring in the growth of the Irrigation automation market.

The market players are focusing mainly on new product development; and mergers and acquisitions, which helps them in creating a firm hold in their market presence. For example, during July 2020, Net Irrigate was to be acquired by Lindsay Corporation. It is an agriculture IoT (Internet of Things technology) company that provides remote irrigation monitoring solutions for irrigation consumers. This acquisition was aimed at aiding the growers to use highly sustainable and advanced farming practices, and increase water efficiency and energy while operating and maintaining irrigation systems.

Key players in the global market include:

Some of the other large players in the global irrigation automation market are:

•  Oct-2020: Lindsay Corporation along with Microsoft, would develop intelligent digital solutions using Microsoft’s Azure. This development aims to enhance irrigation management, broaden the detection & reporting of issues in irrigation system; and also help growers continuously evaluate and improve the profitability and sustainability of their operations.

•  Sep-2020: Hunter Industries announced its collaboration with Augmentir, Inc., a leading provider of the next-gen AI-based connected worker’s software for industrial companies. In the collaboration, they are creating a Connected Worker platform for the manufacturing operations.

•  Feb-2020: Valley Irrigation collaborated with Cordoba Technologies, Inc. (CTI), which is an innovator in automated, high-precision systems for crop protection products, aiming to research the most effective ways to enhance the technology, innovating and redefining the functionality of centre pivots. The companies’ main objective is to reduce the amount of chemicals growers use, to support plant health, and also give growers more crop management options.

•  Jan-2020: Netafim collaborated with Arable Labs, which is the leader in the field of innovative field-sensing and analytics. They aim to integrate Arable’s data into Netafim’s automated irrigation and fertigation cloud-based platform, NetBeat. This helped in making irrigation, fertigation, and crop management decisions easier, more precise, and way more reliable.

•  In September 2019, Weathermatic collaborated with Aspire Software Solutions (US) in order to develop new cost-effective, cloud-based software for improving the management of irrigation processes. This helped the company to provide the customer with business software, that is mobile-based, with expertise in water management tools.

What is the irrigation automation market growth?

What is irrigation automation?

Irrigation Automation is a process of irrigating with the added capabilities of automatic systems.

What are the factors driving the irrigation automation market?

Growing awareness about the benefits of irrigation automation among farmers and standardized and low cost are the factors driving the growth of the market.

Which region is expected to witness a significant demand during the forecast period?

Significant growth is to be witnessed by the Asia Pacific during the forecast period 2021-2027.

Name some key players operating in the irrigation automation market.