Three-dimensional (3D) cell culture is an artificial environment in which the cells intermingle with the 3D surroundings. The global 3D cell culture market is growing at a significant rate due to growing awareness, increasing focus on developing alternatives to animal testing and technological advancement, and new product launches. Different types of products contributed to the 3D cell culture market size. The market has witnessed a high demand for scaffold-based 3D over the last few years, due to its ability to mimic in vivo conditions. 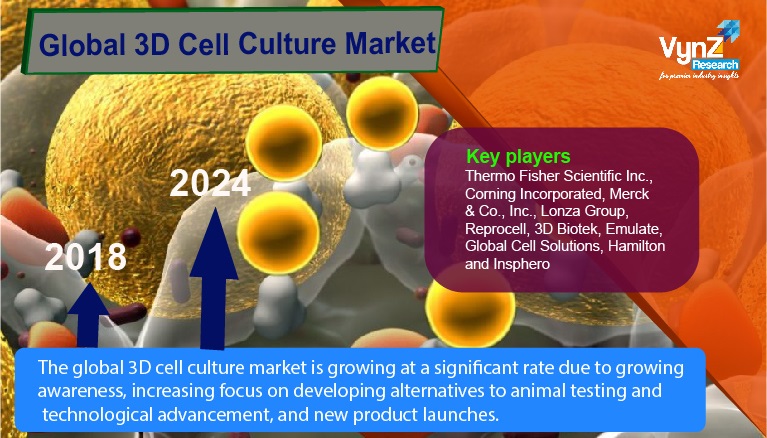 The 3D cell culture market has been segmented by application into drug discovery and toxicology testing, tissue engineering and regenerative medicine, and cancer and stem cell research. Cancer and stem cell segment account for the largest share in the market due to the increasing prevalence of cancer and significant funding initiates for cancer research from private organizations and government.

The technological advancement and new product launches, growing awareness, availability of funding for research from government and private investors, increasing demand for effective and affordable treatment and increasing focus on developing alternatives to animal testing are the primary growth drivers for 3D cell culture market. Three-dimensional cell culture is widely used in drug discovery and tissue engineering, due to its ability to provide accurate data for the various in-vivo test.

Emergence of microfluidics-based cell culture, advancements in the field of cell imaging and analytical systems, development for formulating personalized cosmetics, compliance of 3D cultures in detecting phenotypic changes, and regenerative medicine, focus on providing next-level of treatment management options to patients are also fueling the growth of the 3D cell culture market. Moreover increasing prevalence of cancer is also boosting the growth of the market. For instance, according to the World Health Organization (WHO), in 2015 approximately 8.8 million people died due to cancer. Moreover, approximately 70% of the deaths from cancer occur in low and middle-income countries.

The lack of infrastructure, high initial investment and lack of consistency in three-dimensional cell culture products are the major challenges for the growth of 3D cell culture market. Researchers face a major problem in inserting scaffold into microplate wells; this inconsistency in the products reduces the reproducibility of results and thus reducing the efficiency of the research.

The key challenge for the new entrants is the survival in capital intensive and highly regulated 3D cell culture industry. Research laboratories, institutes, and biopharmaceutical and biotechnology companies are rapidly adopting three-dimensional cell culture in practice replacing 2D cell culture; this decreases the competition among manufacturers of 3D cell culture products as buyers are in large number in the market.

Geographically, North America is the largest 3D cell culture market as the region is home to the largest pharmaceutical and biotechnology industry players. Some of the other factors leading to the growth of the North American market are increasing the prevalence of cancer, significant support from the government in the form of grants and funds, expanding biopharmaceutical industry, and availability of technologically advanced products.

Asia-Pacific is observed to witness the fastest growth in the market, as the region comprises of largest population. In addition, increasing prevalence of cancer, increasing number of research-related activities, expanding biotechnology and pharmaceutical industry, and growing medical tourism is also creating a positive impact on the 3D cell culture market growth in the region.

Key players in the industry are investing in the development of innovative and advanced products, which is strengthening their position in the market. In November 2012, Corning Incorporated acquired a majority of the Discovery Labware business from Becton, Dickinson, and Company to expand its presence in the laboratory consumables market. Thermo Fisher Scientific Inc., Corning Incorporated, Merck & Co., Inc., Lonza Group, Reprocell, 3D Biotek, Emulate, Global Cell Solutions, Hamilton and Insphero are some of the key players offering 3D cell culture products.