The 3D & 4D technology market was valued at USD 198.0 billion in 2019 and is expected to reach USD 467.0 billion by 2025, at a CAGR of 14.0% over the forecast period 2020 - 2025. To simplify activities, the integration of innovative and advanced products into current work environments is rapidly becoming an important method for improving the efficiency of business processes. 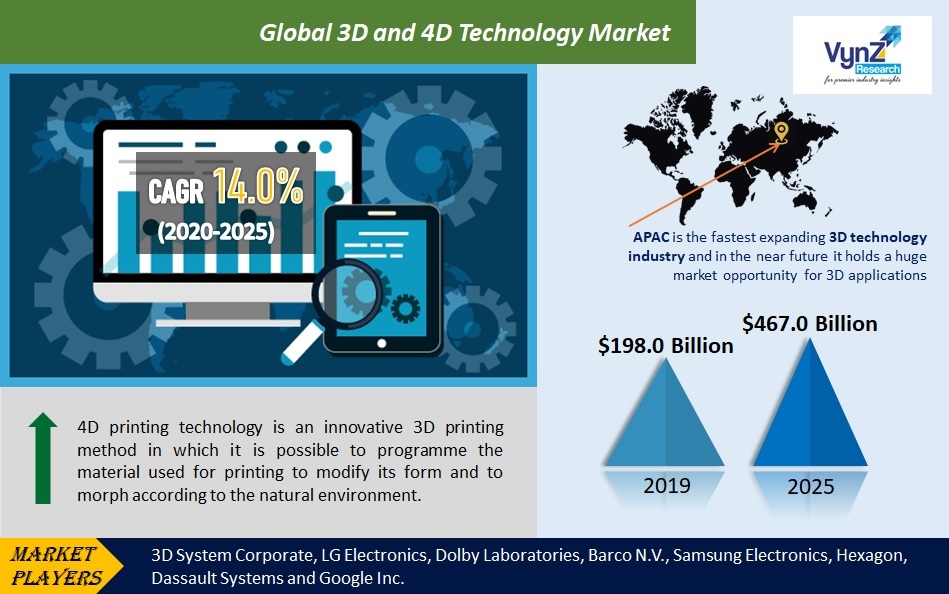 Over the forecast period, the global 3D & 4D technology market is expected to experience substantial growth. With their increased application in the engineering, entertainment and healthcare industries, 3D & 4D technologies are being widely acclaimed. They may be used for applications that are industrial, consumer, governmental or otherwise.

The rising gaming and entertainment industry is one of the factors leading to the development of the 3D & 4D technology market. The production of 3D movies enhances the income of the 3D technology industry.

-3D Gaming and other products

•    The increase in the application of 3D printers is accelerating the rate of growth of the market.
•    The use of 3D printers is spread across various industries. A large share in 3D printer applications is owned by the automotive and aerospace industries.
•    Prototyping in the present scenario is expected to dominate 55 percent of the 3D printing industry. It requires research and gives a simple demonstration of the goods for distribution and cooperation before submitting the final prototypes to manufacturers.
•    A study conducted by Sculpteo showed that in2018, more than 70% of businesses had increased their 3D printing expenditures compared to 49% in2017, and about 93% of businesses were able to achieve a strategic edge such as minimising time-to-market, encouraging shorter production runs.

•    Healthcare spending is on the rise, with over 80% of it government funded. In health services, in reconstructive medicine, 3D printing is used. The healthcare vertical is expected to expand profitably throughout the projected period as more 3D products are used for simulation and proper diagnosis.
•    Siemens, a German multinational conglomerate, produces products such as Orbic 3D for intraoperative 3D imaging functionality in surgery. In addition to reducing manual operation, Olympus offers a 3D imaging solution for clinical surgery with more light-sensitive images and greater depth of view.

-Rest of the World

APAC is the fastest expanding 3D technology industry and in the near future it holds a huge market opportunity for 3D applications. Developing economies such as India and China are major countries that have a huge potential for 3D technology applications in the APAC field. In the APAC region, Japan is another big market for 3D technology. Rising sales levels, lifestyle changes, and the need for faster manufacturing technologies are some of the major drivers responsible for spurring demand for APAC 3D technology.

•    Many viewers go for movies with 3D motion pictures and interactive effects as a leisure experience nowadays. 3D is the standard technique used for visual effects, with new advances in 3D animation and an upsurge in computer-based graphics. There are many approaches to 3D animation in videos, such as physical effects in movies and hand-drawn animation. It is 3D that is now considered as the future of visual material for broadcasting in all these respects.
•    A research undertaken by 3D Hubs, a manufacturing logistics network, reported in 2018 that 3D printers & apps and 3D printing service providers gained, by segment, more than 50% share of the market for 3D & 4D technology.
•    Once used mainly for entertainment, 3D & 4D processing is now rapidly being used in numerous sectors such as healthcare, education and manufacturing, pushing the industry in turn. In addition, the manufacture or production of individualised parts and components to satisfy the needs of the small-scale industry contributes greatly to the development of the existing demand for 3D&4D manufacturing.

The advancement of technology is a capital-intensive operation, with 4D printing technology receiving investment from different universities due to its possible production benefits. There is increasing awareness of the 'time' factor of 3D printing and universities such as Birmingham, Bristol, Durham, Edinburgh, Napier, Leeds, Warwick, and York are discussing the idea.

3D printing plays an important part in the business growth of different verticals of 3D manufacturing. The driving force for the 3D & 4D technology industry is growing investments in R&D for the production of new systems and increasing applications for 3D printing. However, in recent years the market has been facing a decline. Cost and the affordability of raw material, as well as a lack of 3D content availability, are the limiting factors.

The deployment of 3D sensors in the military and defence industry is expected to grow in the coming years due to their features and advantages. The US government is funding the military and defence sector's use of 3D printing and additive manufacturing. US Marines have been using 3D printing technology to build instant bunkers that are capable of carrying a HIMARS truck-mounted rocket launcher system, according to an article written in The EurAsian Times. The Defence Innovation Unit (DIU) partnered with Icon 3D, a construction firm specialised in 3D printing technology, headquartered in Austin, to do this. In addition, at Camp Pendleton in Southern California, the US Army Engineer Research and Development Center installed a 3D-printed concrete bridge of 32 x 16 feet with eight-foot-tall walls.

•    Converting file formats is often not an easy task; it takes time and effort.

•    An intermediate format has been developed, however to solve the interoperability problem by merging two proprietary formats. STL and COLLADA, for example, are commonly used neutral formats for exchanging templates through CAD software.

•    3D and 4D imaging systems are susceptible to dust, microparticles, impurities, and vibrations, such as 3D and 4D sensors and cameras. The consistency of a picture may be influenced dramatically by a minor disruption. This instruments therefore require careful attention.
•    3D and 4D imaging costs depend on the size and complexity of the scanned 3D or 4D image, as well as the total size and geometry of the purchased machines.
•    High-end 3D and 4D image sensors have a short operating life, such as healthcare imaging sensors. Potential customers may be distracted by the cost of their regular repairs or substitution. Manufacturers are forced to spend on the device's packaging, which increases the net cost.
•    The result of these constraints can lead to a decrease in the adoption of 3D and 4D hardware, along with regular advances and updates.

COVID-19 Impact on the Global 3D and 4D Technology Market

The epidemic and spread ofCOVID-19 greatly affected players working in the value chain of 3D and 4D technologies. One of the main factors driving the growth of the 3D and 4D technology industry is the increased worldwide demand for automobiles. However as vehicle sales have declined dramatically worldwide due to lockdowns imposed by various governments to curb the proliferation of COVID-19, the growth of the demand for 3D and 4D technologies has been affected. In addition, these lockdowns have also affected countries' GDP and individuals' per capita income around the globe. Low disposable income has resulted in a decrease in mass buying power, resulting in a decrease in y-o-y growth for the entire economy.

However, due to stability in the automobile, consumer electronics, and healthcare sectors, the latter half of the year is expected to see a normalization of inventory levels and improved demand for 3D and 4D input and output products. As production plants across the world were briefly shut down to curtail the spread of the virus and demand was also limited, the COVID-19 epidemic impacted the manufacturing of 3D and 4D input and output products.

Some of the key players in 3D/4D technology market are: