The global automotive fuel cell market was valued at USD 1.9 billion in 2021 and is anticipated to reach USD 12.6 billion by 2030, thus registering a CAGR of 24.61% during the forecast period 2022-2030. The growth drivers behind this exponential growth include increased government initiatives and investments in the development of fuel cell technology and the use of fuel cells in the transportation sector. 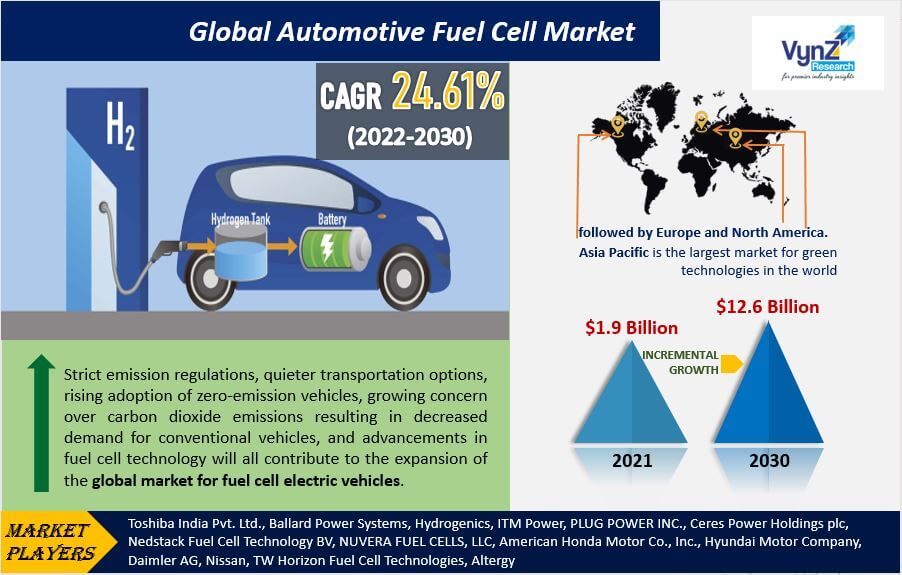 In 2020, lockdown measures were enacted due to the COVID -19 pandemic, and the result was an unprecedented decline in global auto sales. Despite a slow market rebound, sales of cars decreased by a projected 14% year over year in 2020. A 33.33% decline in new car registrations during the first half of 2020 was partially offset by activity during the second half, resulting in a 16% total decline.

Global Automotive Fuel Market is divided into PEMFC and PAFC based on the type of electrolyte used. In comparison to conventional fuel cells, the proton exchange membrane fuel cell (PEMFC) or polymer electrolyte membrane offers low weight, high power density, and lower volume. In buses, vehicles, and large trucks, this cell fuel is used. On the other hand, PACs, which are used commercially, are regarded as modern, first-generation fuel cells. Most often utilized in larger cars, these fuel cells are employed for stationary power generation. Fuel cell demand is rising, which will accelerate market expansion.

The global market for fuel cell electric vehicles is divided into two segments based on the range: short-range and long-range. Due to the rising demand for low-emission vehicles for short-distance travel, short-range is predicted to experience the highest increase during the projection period. Additionally, the market for fuel cell electric vehicles will benefit from the growing adoption of FCEV in a variety of applications, such as the transportation of cargo via ports and airports and by e-commerce enterprises to reduce carbon footprint.

The market is divided into Passenger Car, Bus, Light Commercial Vehicle (LCV), and Truck segments based on vehicle type. Due to the high adoption rate, rising demand for personal mobility, and multiple emission rules implemented by various governments, the passenger car sub-segment dominates the market. Another factor driving up demand for the fuel cell-based passenger vehicle sub-segment is the widespread adoption of clean, low-emission vehicles by governments and customers. However, many governments are now implementing fuel cell-based buses to cut down on carbon emissions, which is why the Buses sub-segment is also anticipated to grow in the near future.

Strict emission regulations, quieter transportation options, rising adoption of zero-emission vehicles, growing concern over carbon dioxide emissions resulting in decreased demand for conventional vehicles, and advancements in fuel cell technology will all contribute to the expansion of the global market for fuel cell electric vehicles. In addition, government initiatives, portable batteries, shorter refueling times, long-range, and FCEVs will all contribute to the market's expansion.
Governments across the globe have established ambitious goals to put a significant number of FCEVs on the road in the short, medium, and long terms. To assist this enormous step forward, regional governments have also implemented many financial and tax-benefit measures.
Automakers are investing continuously in research and development as a result of the increase in demand for automobiles in order to create goods that are affordable, environmentally friendly, less hazardous, and have a long useful life. Production of automobiles is rising in emerging nations, which is in turn driving the global market for automotive fuel cells.
The demand for clean energy sources is being driven by growing worldwide environmental challenges like climate change and poor air quality caused by increased fossil fuel consumption. Because fuel cells produce no emissions and help reduce greenhouse gases, the automotive fuel cell market is anticipated to grow over the course of the forecast period.

The high cost of fuel cells is the main obstacle facing the automobile fuel cell sector. A membrane, bipolar plates, stacks, gas diffusion layers, and a catalyst are used to construct a fuel cell. In a fuel cell, hydrogen atoms are oxidized to produce protons and electrons. The chemical reaction uses a catalyst. PEM fuel cells, which are mostly utilized in automotive applications, typically use platinum as a catalyst. One of the priciest metals is platinum. Fuel cells are more expensive than the batteries used in BEVs since the catalyst accounts for around 46% of the entire cost of a fuel cell. Additionally, the price of batteries is steadily declining as a result of greater research and development in battery technology.

FCEVs have a long driving range, quick refueling, quiet operation, and no emissions of greenhouse gases or other air pollutants. As a result, fuel cell technology is perfect for use in vehicles and transportation. Electricity generated by fuel cells is flexible and scalable, making it suitable for heavy-duty transportation applications including material-handling vehicles, buses, trains, autos, and light commercial vehicles. Commercial applications also employ fuel cells as stationary fuel sources. Fuel cells can be used in combined heat and power (CHP) systems to produce heat and power as well as to provide primary and backup power. According to the US Department of Energy, 68,500 fuel cell units were sold for various uses worldwide in 2018, producing USD 2.3 billion in fuel cell revenue.

The market for autonomous fuel cells is anticipated to be the largest over the forecast period, followed by Europe and North America. The market is being driven by the strong demand for fuel cell buses for both public and private transportation as well as the large share of passenger cars in total vehicle manufacturing. Additionally, Asia Pacific is the largest market for green technologies in the world, with Japan, China, and South Korea now having the largest markets there for fuel cells. In addition, the region is home to top OEMs in the automotive fuel cell market as Toyota, Hyundai, and Honda. These businesses intend to make significant investments to promote fuel cell vehicles and increase their production capacity. Hyundai, for instance, intends to spend USD 6.7 billion to boost fuel cell output and multiply its production capacity by more than 200 by 2027.

•    By 2021, Nikola introduced its fuel cell, truck model. According to the company, compared to other models already on the market, the truck would have the greatest driving range and the most powerful fuel stack.
•    For the anticipated deployment of hydrogen fuel cell electric buses (or "FCEB") throughout Europe in 2022, Ballard Power Systems received orders for a total of 40 FCmoveTM-HD (70kW) modules in November 2021. France, Germany, and the UK are all using these FCEBs.
•    Ballard fuel cell technology is being used to power the first fleet of zero-emission FCEBs being deployed in Rouen, France, and the expansion of the FCEB fleet already in operation in Pau, France. Ballard fuel cell buses are now operating or being developed in four French towns.
•    The formation of the H2OzBus Project and the signing of an MoU with strategic partners, including Transit Systems, a division of the SeaLink Travel Group, Ballard Power Systems, BOC Limited, Palisade Investment Partners, and ITM Power, were announced by the UK-based manufacturer of hydrogen energy equipment on May 10, 2020. The consortium will test and demonstrate the viability of using hydrogen fuel cell electric buses for public transportation in Australia.
•    The new hydrogen fuel cell-powered van was introduced for the first time in North America on October 20, 2021, at the 2021 Plug Power Symposium by Plug Power Inc., a developer of turnkey hydrogen solutions for the global green hydrogen economy.
•    Dec. 20, 2021, A Memorandum of Understanding (MOU) has been signed between Groupe Renault, a major participant in the automotive industry, and Plug Power Inc., a producer of fuel cell systems and hydrogen-related services, to establish a 50-50 joint venture with a French basis by the end of the first half of 2021. In the upcoming years, this strategic JV will put Groupe Renault and Plug Power in a position to dominate Europe's research and development (R&D), transformation, production, and marketing of fuel cell-powered cars and hydrogen turnkey solutions. This joint venture platform will cater to the fuel cell light commercial vehicle, taxi, and commercial people transportation markets, all of which are rapidly expanding.

The Automotive Fuel Cell Market report offers a comprehensive market segmentation analysis along with an estimation for the forecast period 2022–2030.

What are the major challenges for automotive fuel cell market?

Elevated vehicle cost, extremely flammable and difficult to identify hydrogen leakages are the major challenges for the growth of automotive fuel cell market. In addition, mounting need for BEVs and HEVs and inadequate hydrogen infrastructure are also hindering the growth of the market.

What are the key growth drivers for this market?

Which are the major key players for automotive fuel cell market?

How the future market for automotive fuel cell?