The global Software Defined Networking Market size is anticipated to reach USD 36.5 billion by 2030 from USD 14.5 billion in 2021, thereby witnessing a CAGR of 20% during the forecast period 2022-2030. Software-Defined Networking is a network architecture in which network management is segregated from forwarding and provides a programmatically effective network setup to improve network performance, thus SDN is a centralized and intelligence-based network control. It focuses on providing an open interface that aids in the creation of software to regulate data traffic flow between network resources. Thus, SDN assists businesses in meeting their needs so as to improve network control. They are now widely employed in a variety of industries, including healthcare, education, banking, and government as it offers flexibility and is highly scalable.Nevertheless, SDN provide several advantages which include agility, robustness, cost & time efficient, flexible network infrastructure, robust innovative, and ease-in-network congestion. 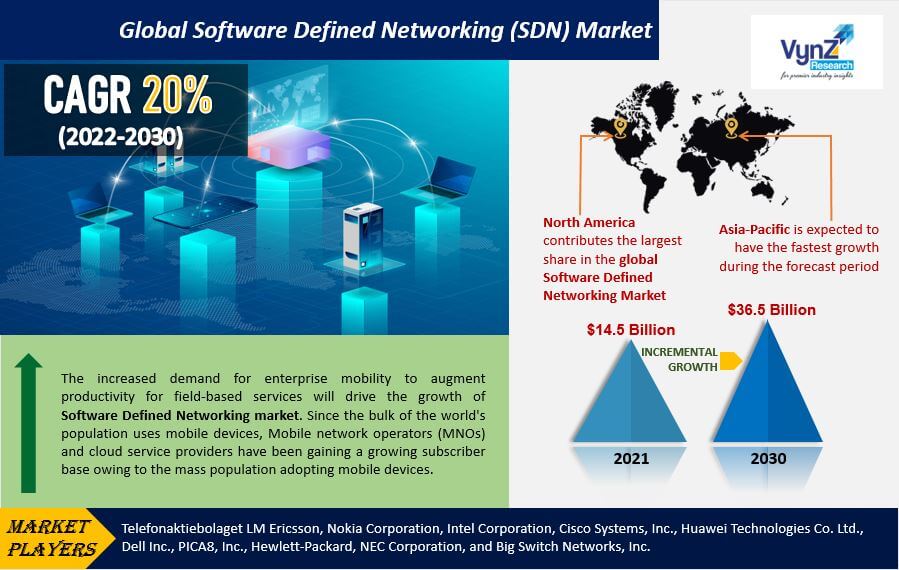 The rising number of mobile devices and server virtualization, and mounting demand for data center consolidations are the trends that are influencing Software Defined Networking Market.

Software Defined Networking Technology is predicted to see strong market demand in the future years owing to increased investment by vendors in network function virtualization and software defined networking to keep up with surging internet traffic caused by the coronavirus .

Among these three segments, SDN Infrastructure component is likely to drive market expansion and will contribute the largest share during the analysis period. Its ability to manage and orchestrate flow control among various network parts and applications is credited with the market's growth, thereby propelling the growth of the Software Defined Networking Market.

Professional services are expected to have the fastest growth during the forecast period owing to the increased deployment and integration of solutions across organizations, telecom service providers, and cloud service providers. Furthermore, the spike in demand for low-cost, high-efficiency services to cut operational costs has aided the professional services market's expansion.

SDN Via Overlay segment is anticipated to have the fastest growth during the projected period. Overlaying an SDN network or network component on top of existing infrastructure creates a conceptually independent network or network component. By splitting bandwidth into channels and dedicating each channel to a specific device or service, the overlay optimizes network resources.

The telecom service providers' active efforts to overcome the traditional network's difficulties and increasing development of Open Source SDN are creating a slew of new opportunities for the software defined networking sector. Telecom service providers have been on the lookout for innovative technologies that are the result of the open source community's and industry's combined efforts. They've been putting Open Platform for NFV (OPNFV), OpenStack/KFV ecosystem, Open Network Operating System (ONOS), and OpenDaylight technologies to the test. These efforts promote the use of next-generation networking technologies such as SDN to improve the efficiency, flexibility, scalability, and programmability of telecom networks.

The increased demand for enterprise mobility to augment productivity for field-based services will drive the growth of Software Defined Networking market. Since the bulk of the world's population uses mobile devices, Mobile network operators (MNOs) and cloud service providers have been gaining a growing subscriber base owing to the mass population adopting mobile devices. This tendency is especially noticeable in emerging markets, where mobile phones, tablets, and mobility-based technologies, are in great demand. Service providers must ensure that their network can handle the growing number of customers which can be made possible by SDN. As a result, the growing necessity and desire for mobility are the primary driving drivers behind the industry's expansion.

Other factors attributing to the growth of the Software Defined Networking market include  increased investment of CSPs to automate network infrastructure, and a substantial reduction in CAPEX and OPEX will fuel the growth of the SDN industry.

The adoption of SDN technology is hampered by a lack of standards for full device control. In the SDN industry, the OpenFlow framework is the most widely used standard. A unidirectional forwarding table update mechanism is included in the framework, which determines the condition of linked devices. The OpenFlow framework, on the other hand, is incapable of performing a basic device configuration, restricting its interoperability with a variety of existing traditional networking technologies. Furthermore, the SDN market's ability to give full device control, which is a requirement for most networking systems, is limiting its expansion.

The dearth of skilled expertise, increased complexity and reliability concerns of SDN architecture, mounting difficulties to transition from traditional network to SDN are some of the other challenges faced by software defined networking market.

The increased adoption of cloud computing platforms is encouraging enterprises to shift from traditional network architecture. Traditional network designs are often hierarchical and based on tiers of Ethernet switches. The traditional networking frameworks were not built to manage the dynamic computation and storage requirements of today's enterprise networks. As a result, businesses have been pushed to embrace new and complex networking technologies such as SDN. SDN solutions include a dynamic and flexible network architecture that can adapt to changing business, end-user, and market demands, thereby propelling market opportunities for the SDN industry.

North America contributes the largest share in the global Software Defined Networking Market owing to increased adoption of internet-enabled services, growing population and rising technological developments in the region. Moreover, tehry are early adopters of advanced technologies like BYOD, mobility services, cloud computing, etc. and increased industrialization along with favorable stnadrds and regulations will boost the market growth for the software developed networking industry in the region.

Asia-Pacific is expected to have the fastest growth during the forecast period owing to rising initiatives to support digitalization in countries like India, China, and Southeast Asia along with rising demand for cloud services, data center consolidation, and server virtualization in the region. Moreover, the rising number of start-ups and surge in adoption of novel and advanced technologies like virtualization and mobility solutions will develop the SDN industry in the region.

The industry players are capitalising on market expansion by developing novel solutions and launching new products in the global SDN market. Users can get advanced technology for better and faster data processing and storage from providers who specialise in software defined networking technology. the prominent industry players are working on  the research and development process, which aids them in making the system more efficient and accessible.Thus, key companies in the SDN market are developing cutting-edge technologies and pursuing mergers and acquisitions, which are assisting them in gaining a competitive advantage. Local firms, on the other hand, have been shown to rely on new technology to generate cost savings, hence strengthening market competition to some level.

Ericsson Cloud SDN is a software-defined networking solution for virtual and physical workloads in a telecom cloud that delivers seamless intra-datacenter communication.  It's a one-of-a-kind combination for industrialized multi-protocol and customizable OpenDaylight platform along with advanced routing capabilities. As part of NFVI solution, it delivers network automation services to VNF workloads.

Software-defined networking (SDN) is being used by Intel IT to provide on-demand deployment of networks and network services. Intel can better support internal customers—Intel application developers—who work in a fast-paced agile development environment by virtualizing the network through a programmable interface. These clients must be able to use network resources without having to deal with a delay caused by network configuration and provisioning.  SDN can help get more business value out of virtual machines (VMs) in their data centres, as well as provide the following advantages:

In March 2022, Nokia stated that it has been chosen as the only provider of software defined network manager and controller (SDN-M&C) services for Vodafone's multi-access fixed network technology. Both companies are performing proof-of-concept trials in Europe as part of the collaboration. Vodafone and Nokia plan to roll out the technology more widely later this year, based on the positive results of these testing.

With 143 million marketable Next Generation Network (NGN) broadband homes, Vodafone is one of Europe's leading fixed access providers. The SDN management and control functionalities will be used to simplify, automate, visualize, optimize, and enhance Vodafone's broadband networks, as well as support the company's network-as-a-platform (NaaP) and other customisable services plan.

The Software Defined Networking Market research includes a comprehensive market segmentation analysis as well as projections for the analysis period 2022-2030.