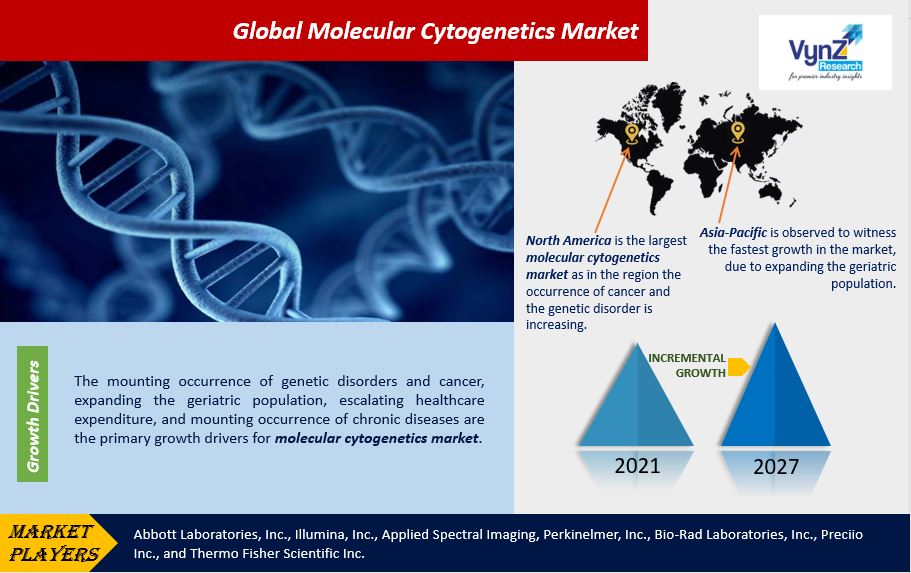 On the basis of product, the market is subdivided into kits & reagents, consumables, instruments, and software & services. Of all products, kits & reagents segment accounted the largest share in the market due to the mounting occurrence of cancer and genetic disorders. In addition, the software & services segment is expected to grow at the fastest rate in the market, due to speedy acceptance of automation in the laboratory process and escalating inclination for outsourcing of costly services.

Evolution from fish to array-based techniques is the trend in the molecular cytogenetics market.

The mounting occurrence of genetic disorders and cancer, expanding the geriatric population, escalating healthcare expenditure, and mounting occurrence of chronic diseases are the primary growth drivers for molecular cytogenetics market. For instance, according to GLOBOCAN globally, approximately 14.1 million new cancer cases were diagnosed and there were 8.2 million cancer deaths in 2012. In addition, according to the World Health Organization (WHO), in 2015 approximately 8.8 million people died due to cancer. Moreover, approximately 70% of the deaths from cancer occur in low and middle-income countries.

Elevated price of innovative instruments and unfavorable reimbursement scenarios are the major challenges for the growth of molecular cytogenetics market.

Globally, the manufacturing companies trying to enter the molecular cytogenetics market are required to maintain stringent regulatory standards. Moreover, the high level of capital requirement also poses a major barrier to the entry of new players. The instruments required for cytogenetics procedures and researches are equipped with advanced functionalities due to their high costs. This offers an edge to the established players in the industry competition.

Asia-Pacific is observed to witness the fastest growth in the market, due to expanding the geriatric population. In addition, the mounting occurrence of genetic disorder and cancer, and escalating healthcare expenditure are also creating a positive impact on the molecular cytogenetics market growth in the region.

Key players in the molecular cytogenetics market are catering to the demand of these devices by investing in technologically advanced products in their product portfolio across the globe. In October 2018, Precipio Inc., launched HemeScreen, a molecular test for the mutation in hematologic cancer. Abbott Laboratories, Inc., Illumina, Inc., Applied Spectral Imaging, Perkinelmer, Inc., Bio-Rad Laboratories, Inc., Preciio Inc., and Thermo Fisher Scientific Inc. are the key players offering molecular cytogenetics.

Who are the major players for molecular cytogenetics market?

What are the growth drivers molecular cytogenetics market?

How molecular cytogenetics market is classified on the basis of product type?

On the basis of product, the market is subdivided into kits & reagents, consumables, instruments, and software & services. Of all products, kits & reagents segment accounted the largest share in the market due to the mounting occurrence of cancer and genetic disorders.

What is molecular cytogenetics?

Molecular cytogenetics is the genetic variation through in-situ hybridization techniques. It provides an analysis of genome organization, its behavior, and structure in high resolution.
Pre Purchase Enquiry