The global Electric Off-highway Vehicle Market is anticipated to reach 17.5 billion USD by 2025, up from an expected 6.3 billion USD in 2020 at 22.8% CAGR for the said period. The key factors responsible for this growth would be development of advanced and new products, the post-2020 recovery of end-use sectors and upcoming norms of emission for the off-highway vehicles. 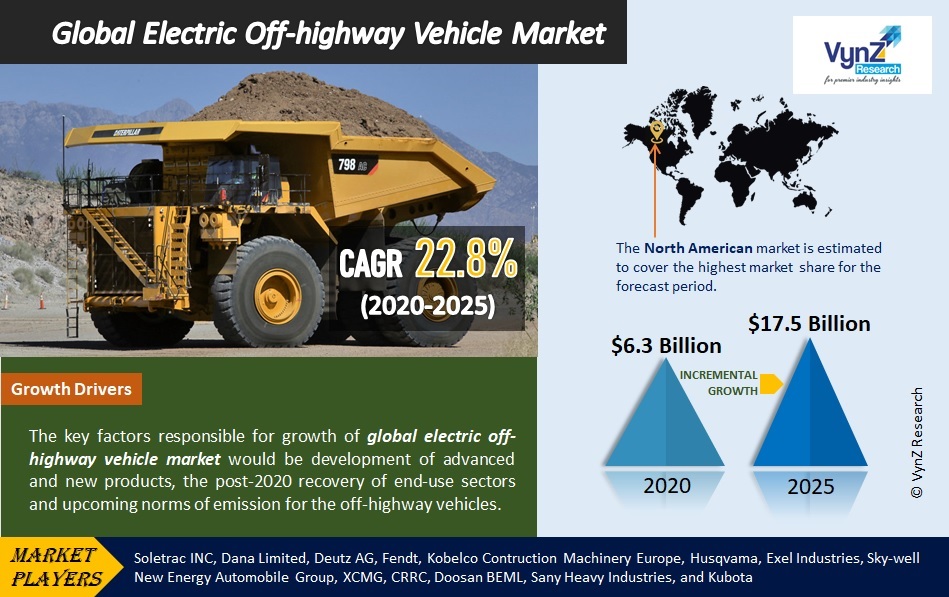 Then OEMs have lately delayed their new vehicle developments and their launches. Taking into account the global financial slowdown, the manufacturers of electric off-highway vehicle will abstain from adding up extra cost to these vehicles by installing hybrid powertrain systems and batteries.

Impact of COVID-19 on the Electric Off-Highway Vehicle Market:

Due to the COVID-19 pandemic, the global off-highway vehicles industry is estimated to see a decent of –3.3% in 2020. This pandemic has significantly affected the heavy equipment industry because some of the manufacturers are having to shutting down their plant operations while others are still considering to use their efforts to cater to the demand for the medical supplies. As lockdowns have been put up around the world to contain spread of this disease, the mining and construction projects are being greatly affected. Almost all scheduled projects are expected to be held up, which is might also affect the sales of equipment, along with the demand for regularly replaced products, such as lubricants from existing fleets. The key players in this market are well aware that when this market reopens, in order to adhere to safety measures, the production levels will be reduced. And also, the customers’ spending’s, whose business has been affected due to the pandemic will be less.

Although, with the production facilities resumption across the world, the off-highway equipment’s market is expected to be boosted by the opening of mines globally, the season of planting & harvesting and utilization of digital services in order to help customers. A few China-based players showed a positive stance in the March of 2020, therefore representing a revival of the off-highway industries in the country. Also, the lockdown restrictions’ relaxation in Japan and the facilities in India gradually opening may highly boost the demand for the electric off-highway vehicle market by 2021.

The Electric off-highway vehicles market includes both hybrid-electric and battery-electric off-highway vehicles. The Hybrid-electric vehicles consist of an ICE along with one or more electric motors which uses energy stored in the batteries to provide additional supplementary power for power tools, the vehicle and electronic devices. In Battery-electric vehicles the combustion engine is replaced with an electric motor and the batteries that powers the machine and all its attachments, hence are fully electric.

1. Based on Propulsion: The segment estimated to lead the market during the forecasted period is the battery-electric segment.

Based on the Crop Type, the Electric Off-Highway Vehicle market is segmented into:

The noise control and emission regulations for the off-highway equipment have been constantly upgrading at the regional levels. As per the EU’s emission regulations, particulate matter (PM) and NOx levels for electric off-highway vehicles have been considerably reduced by nearly 97.2% and 95.7%, respectively, i.e., from Stage I to Stage V. In the same way, according to the US EPA norms, these levels have seen a downgrowth of nearly 96.2% and 95.6% respectively, i.e., from Tier I to Tier IV. Also, countries like Japan, China, India and South Korea are expected to follow these norms along with the US and EU standards.

2. Based on Battery Capacity: the largest market share is expected to be held by <50hp power output.

The current demand for electric off-highway vehicles is likely to be limited to the mini construction vehicles because of availability of the product and electrification technology limitations. Therefore, globally, the market for <50 hp is estimated to be the largest market segment based on power output.

Also, the 50-200 kWh segment is expected to be the second-largest market for electric off-highway electric vehicles, based on battery capacity.

3. Based on Application: The largest market share in year 2020 to be held by the hospitals end user segment.

Based on application, the Electric Off-Highway Vehicle market is segmented into-

As per application, mining and construction are the largest segments in the EOHV market due to high demand for vehicle emission and operational cost minimization. The electric trucks are also being highly preferred at underground and deep mines, because they do not generate noise and emissions. The rising demand for products such as iron, gold and copper are driving mining industry encouraging mining companies to timely update their equipment’s and also invest in even more productive electric vehicles.

4. Based on Battery Type: The largest market share in year 2020 to be held by the hospitals end user segment.

Based on Emitter Type, the Electric Off-Highway Vehicle market is segmented into-

5. Based on Equipment Type:

LHD loaders and Diesel-powered vehicles emit large amounts of harmful gasses, that includes nitrogen dioxide, carbon dioxide, carbon monoxide, and others. Miners experience several lethal health effects, that include adverse effect on sensory perceptions, chronic bronchitis, severe respiratory irritation, and emphysema, as they are exposed to such harmful emissions for a long time because of long shifts. Also, these emissions increase heat generated in the underground mines. As per the International Council on Mining and Metals (ICMM), to remove heat and pollutants from the mining tunnels, nearly 40% of an underground mine’s energy’s outlay is spent on the operating ventilation systems. These factors decrease efficiency of their production while increasing the mine’s overall operational costs.

• As compared to the IC engine counterparts, the electric off-highway vehicles are more productive. Due to less mechanical parts, they contribute to lower operational cost and therefore, are increasingly being preferred by the construction contractors./p>

• Due to active government measures and an increase in fuel prices, the electric Off-highway vehicles are preferred in agricultural applications.

Most of the electric off-highway vehicles are presently working on using lithium-ion batteries because of their various advantages over the nickel-metal and lead-acid hydride batteries. The Lithium-ion batteries have numerous drawbacks that greatly affects its battery performance. These limitations of the lithium-ion batteries are - issues related to its robustness, shorter lifespan, performance fluctuations due to changing temperatures, limited power density, high cost and rigidness.

One of the major factors restricting the growth of electric off-highway vehicles in both construction and mining applications is the loss of productivity because of its high charging time. As mining and construction companies work nearly 8–16 hours per day, it reduces the chance for the required charging time of electric off-highway vehicles fully. Most of the electric off-highway vehicles take up to 4–8 hours to completely charge, thus decreasing the productivity because of the time that is lost in recharging the vehicles. For an example, the JCB’s 19C-1E, a mini excavator, requires around 8 hours to charge fully from empty by using a supply of 230V 16A, or 12 hours by using a supply of 110V 16A. While, a Volvo CE 2.5-tonne ECR25, a compact excavator, requires nearly 6 hours of charging time for only 8 hours of runtime.

Electric off-highway vehicles have very limited affinity for long run applications. Dump trucks, for example, carries dumping materials to the dumping area from the mining site. Here, the distance plays a crucial role, as it is difficult for vehicles to cover such long distances because of its limited battery capacity. But mining companies that manufacture equipment’s are working developing equipment’s that are cable connected. Nevertheless, such cable connected equipment also lack in terms of versatility.

Based on Geography, the Electric Off-Highway Vehicle Market is segmented into-

The growth of the US market is majorly due to the environmental protection measures, with the help of upcoming stringent emission norms that looks after the for-fuel economy in the country, and also the efforts taken by local companies to manufacture hybrid and electric equipment’s for the domestic market. The North American market is estimated to cover the highest market share for the forecast period. The Caterpillar newly launched the world’s biggest electric excavator equipped which had a300-kWh battery pack with it. With the major electric off-highway vehicle providers having increasing investments in battery developments, the electric off-highway vehicles, and subsystems, the US is estimated to increase the market growth during the forecast period. Also, one of the key factors leading the growth for the electric off-highway vehicles market in the US is, players like Caterpillar who are developing advanced solid-state battery technology that aims to considerably reduce the drawbacks of the conventional battery types in electric loaders and excavators.

The electric off-highway vehicle market is largely dominated by a few globally established companies like:

In 1925, Caterpillar was founded and headquartered in Illinois, US. It works on designing, manufacturing, and marketing a wide range of engines and machinery. It is a manufacturer of mining and construction equipment’s, natural gas and diesel engines, industrial gas turbines, and also diesel-electric locomotives. The company also provides financial services through its subsidiaries. It is the only manufacturer of hybrid and electric dozers, in line with electric LHD loaders, electric excavators, and electric dump trucks, and also markets them globally. In the FY2019, the Construction segment declared a revenue of USD 22.6 billion, which estimated for 40.8% of the company’s total revenue, that too excluding corporate items and eliminations.

In 1832, Volvo Construction Equipment (Volvo CE) was incorporated and is headquartered in Gothenburg, Sweden. The company works on developing, manufacturing, and marketing equipment for the mining related industries under the brands like Volvo and SDLG.

These players have made contracts and entered into partnerships with other such players to considerably strengthen their hold on the position in the highly growing electric off-highway vehicle market. These companies also develop new products, obtain supply contracts, adopt expansion strategies, and establish partnerships, mergers & acquisitions and collaborations to gain a grip in the electric off-highway vehicle market.

Some of the other players are:

In July 2020, Epiroc had an agreement with Vale for providing it with 10 battery-electric vehicles which will be used for 2 Canadian mine sites, including the two Boomer M2C drill rigs, four Scooptram ST14 loaders, two Minetruck MT42 trucks and two Boltec MC bolting rigs.

In March 2020, Komatsu in Japan, had launched its Electric Mini Excavator PC30E-5. It is equipped with an 18.2 kW electric motor, a 36-kWh battery and also offers zero-emission, simple and quiet operation without much vibrations.

In December 2019, Hitachi Construction Machinery had developed a mini excavator prototype (5-ton class) that was battery-powered, aiming to establish an electric construction machinery for a market taking off rapidly in the future.

In May 2019, Caterpillar had launched the first battery-electric load-haul-dump (LHD) platform, the R1700 XE loader concept. It was loaded with MEC 500, a fast-charging system that, with little or no impact on the mine’s existing electrical infrastructure, allows rapid, onboard charging.

10.    Rest of the World (RoW) Market Estimate and Forecast